Nadal sees Argentine Open as next step up comeback ladder 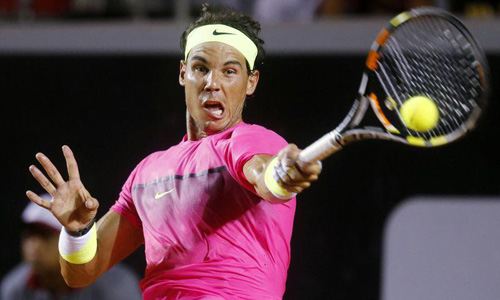 Nadal sees Argentine Open as next step up comeback ladder

BUENOS AIRES (Reuters) - Rafael Nadal, who suffered an upset defeat in the Rio Open semi-finals at the weekend, said on Monday he was confident of taking another step toward recovering his best form in Buenos Aires this week. The Spaniard, ranked fourth after Saturday’s loss to Fabio Fognini ended a run of 52 consecutive semi-final wins on clay, will make his bow in the second round of the Argentine Open at the Buenos Aires Lawn Tennis Club on Wednesday “I’ve come here with a different motivation because I’ve had a spell that wasn’t good for me because for the last seven months I’ve been fairly inactive and had complications,” Nadal told a news conference. “I’m closer to the level I want to reach which is why I feel I’m taking little steps forward and that’s good. Recovery is like a ladder which you don’t climb running but rather step by step.” The 28-year-old, back at the tournament in Buenos Aires 10 years after his first visit, lost the number one ranking to Novak Djokovic last year after struggling with a right wrist injury. Having won his ninth French Open title in June, Nadal withdrew from the U.S. Open in August due to the injury and lost to Tomas Berdych in the Australian Open quarter-finals last month. The heat in the Argentine capital will be another test for Nadal after Rio de Janeiro where Italian Fognini ended his defense of the title. The Italian’s stunning victory ended Nadal’s winning streak in semi-finals on clay and earned him a place in the final against another Spaniard, David Ferrer, which he lost on Sunday. “Physically I’m good. In Rio de Janeiro, I don’t think I had a bad week. I won good matches and lost one which I shouldn’t have lost, although it’s also true that the timetable of the previous match was strange,” said Nadal, who complained of poor scheduling after Friday’s quarter-final win over Uruguayan Pablo Cuevas finished at 3.30 a.m. on Saturday. “I had cramps which I’ve hardly ever had in my life and the truth is my opponent played better than me and made better use of the key moments. I’d have liked to have won there but it didn’t happen.” Nadal starts in Buenos Aires with a doubles match with Argentine partner Juan “Pico” Monaco on Tuesday.