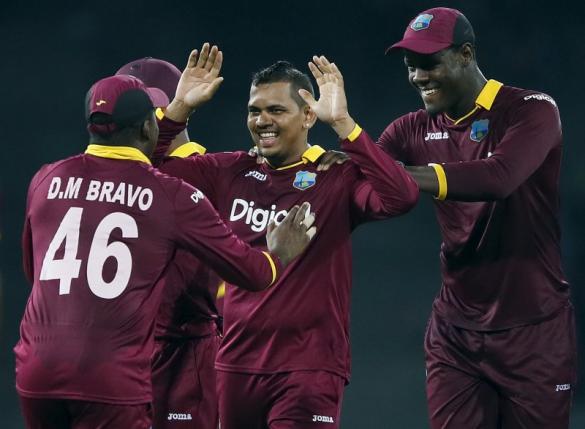 Sunil Narine and Kieron Pollard made triumphant returns to the West Indies team in a comfortable victory over South Africa in the opening match in a triangular one-day international series on Friday. Off-spinner Sunil Narine took a career-best six for 27 as West Indies dismissed South Africa for 188 off 46.5 overs on a slow pitch at Providence Stadium in Georgetown, Guyana. Pollard then did his job with the bat, using his power to hoist six sixes in a run-a-ball 67 not out as the Windies scored 191 for six to win by four wickets with 11 balls to spare. The entertaining innings by the 29-year-old Trinidadian turned the match around after the West Indies had become bogged down and the run rate had slowed to a crawl. All of his sixes came in an arc between long-on and straight hit. In the process he became just the fourth Caribbean player to hit 100 sixes in ODIs, joining Chris Gayle, Viv Richards and Brian Lara. Pollard, who missed the World Twenty20 in March due to a knee injury, had not played an ODI international since October 2014. It was also Narine's first international outing since a suspect bowling action led to his banishment from the game last November. He has been working to modify his action and made the most of his chance to play again on the international stage, bamboozling the South African batsmen with a variety of deliveries. "It's a blessing for me to be back and be able to perform like this," Narine said, adding that he had changed his action "probably 70-to-80 percent". "I'm still getting accustomed, constantly doing my action over and over just to get a little more comfortable. It's still a bit uncomfortable but you have to do what you have to do." For South Africa, who were coming off a disappointing World Twenty20, it was another mediocre performance and the Proteas will be particulary disappointed by the way their middle order collapsed, the final seven wickets falling for only 28 runs. Rilee Rossouw top-scored with 61 runs off 83 balls, while captain AB de Villiers eked out 31 off 49 balls in an obdurate innings that did not include a boundary as South Africa made a solid start. "I thought we laid the foundation perfectly well on a really slow wicket," de Villiers said. "It was difficult to bat. I knew 220-plus was reachable and would be a very difficult score to chase. "It was slower than any other wicket I have played on recently ... but no excuses. We lost the way in the last 10 overs of our batting innings and that's what cost us at the end of the day." The series continues on Sunday when West Indies play Australia, also in Georgetown.