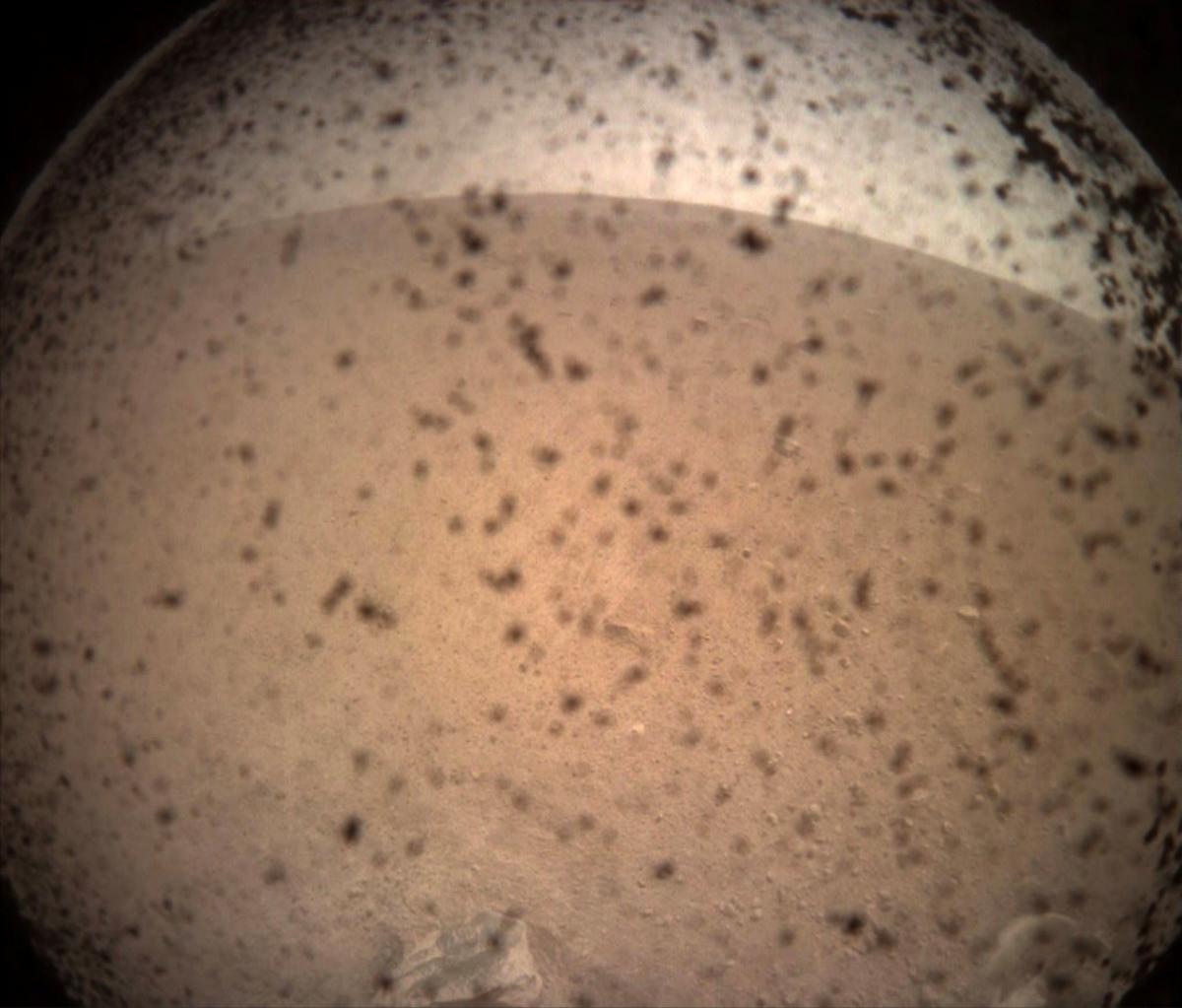 PASADENA, Calif. (Reuters) - NASA’s InSight spacecraft, the first robotic lander designed to study the deep interior of a distant world, touched down safely on the surface of Mars on Monday with instruments to detect planetary seismic rumblings never measured anywhere but Earth. Engineers at the Jet Propulsion Laboratory (JPL) near Los Angeles burst into cheers, applause and hugs as they received signals confirming InSight’s arrival on Martian soil - a vast, barren plain near the planet’s equator - shortly before 3 p.m. EST. Minutes later, JPL controllers received a fuzzy “selfie” photograph of the probe’s new surroundings on the Red Planet, showing the edge of one lander leg beside a rock. Watch parties for NASA’s live television coverage of the event were held at museums, libraries and other public venues around the world, including Times Square, where a small crowd of 40 or 50 people braved pouring rain to witness the broadcast on a giant TV screen affixed to a wall of the Nasdaq building. InSight’s descent and landing, consisting of about 1,000 individual steps that had to be flawlessly executed to achieve success, capped a six-month journey of 301 million miles (548 million km) from Earth. The spacecraft was launched from California in May on its nearly $1 billion mission. It will spend the next 24 months - about one Martian year - collecting a wealth of data to unlock mysteries about how Mars formed and, by extension, the origins of the Earth and other rocky planets of the inner solar system. “The reason why we’re digging into Mars is to better understand not just Mars, but the Earth itself,” said JPL’s Bruce Banerdt, InSight’s principal investigator. A central question is why Mars, once a relatively warm, wet planet, evolved so differently from Earth into a mostly dry, desolate and cold world, devoid of life. The answers are believed to have something to do with the as-yet unexplained absence, since Mars’ ancient past, of either a magnetic field or tectonic activity, said NASA’s chief scientist James Green. While Earth’s tectonics and other forces have erased most evidence of its early history, much of Mars - about one-third the size of Earth - has seemingly remained largely static, creating a geologic time machine for scientists, Green said. InSight and the next Mars rover mission, scheduled for 2020, are both seen as precursors for eventual human exploration of Mars, an objective that NASA Administrator Jim Bridenstine said on Monday might be achieved as early as the mid-2030s.

InSight was the eighth spacecraft to have landed successfully on Mars, all of them operated by NASA. The three-legged lander streaked into the thin Martian atmosphere at 12,300 miles (19,795 km) per hour and plunged 77 miles to the surface within seven minutes, slowed to a gentle touchdown by atmospheric friction, a giant parachute and retro rockets. The stationary probe was programmed to pause for 16 minutes for the dust to settle, literally, around its landing site, before two disc-shaped solar panels were to be unfurled like wings to provide power to the spacecraft. But scientists did not expect to verify successful deployment of the solar arrays for at least several hours. The 880-pound (360 kg) InSight - its name is short for Interior Exploration Using Seismic Investigations, Geodesy and Heat Transport - marks the 21st U.S.-launched Mars mission, dating back to the Mariner fly-bys of the 1960s. Nearly two dozen other Mars missions have been sent from other nations. InSight’s new home in the middle of Elysium Planitia, a wide, relatively smooth expanse close to the planet’s equator, is roughly 373 miles (600 km) from the 2012 landing spot of the car-sized Mars rover Curiosity, the last spacecraft sent to the Red Planet by NASA.

InSight’s primary instrument is a French-built seismometer, designed to record the slightest vibrations from “marsquakes” and meteor impacts around the planet. The device, to be placed on the surface by the lander’s robot arm, is so sensitive it can measure a seismic wave just one half the radius of a hydrogen atom. Scientists expect to see a dozen to 100 marsquakes during the mission, producing data to help them deduce the depth, density and composition of the planet’s core, the rocky mantle surrounding it, and the outermost layer, the crust. The NASA Viking probes of the mid-1970s were equipped with seismometers, too, but they were bolted to the top of the landers, a design that proved largely ineffective. Apollo missions to the moon brought seismometers to the lunar surface as well. But InSight is expected to yield the first meaningful data on planetary seismic tremors beyond Earth. A second instrument, furnished by Germany’s space agency, consists of a drill to burrow as much as 16 feet (5 meters) underground, pulling behind it a rope-like thermal probe to measure heat flowing from inside the planet. Meanwhile, a radio transmitter will send back signals tracking Mars’ subtle rotational wobble to reveal the size of the planet’s core and possibly whether it remains molten.