Nasdaq in bear market, first of the three major US indexes 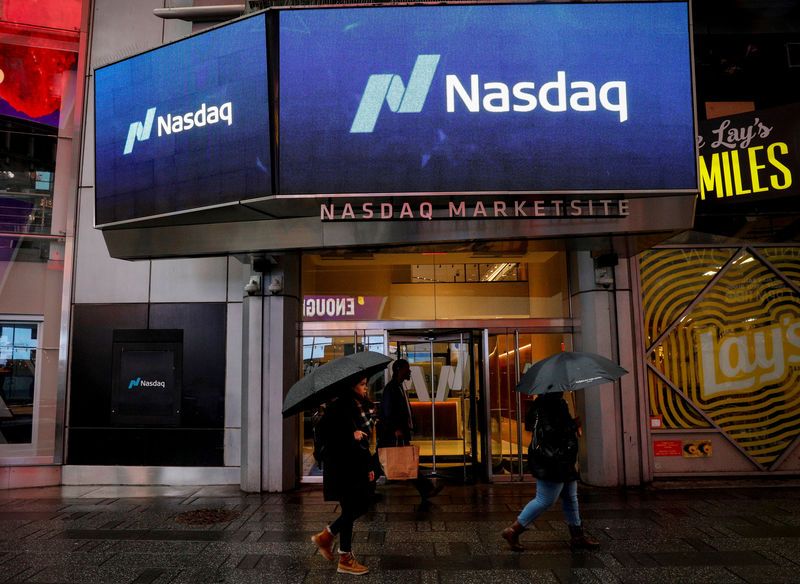 Nasdaq in bear market, first of the three major US indexes

NEW YORK (Reuters) - The  Nasdaq Composite Index confirmed it is in a bear market for the first time since 2008, underscoring fears that the longest bull run in history for US stocks could soon be over. The index finished the day down 21.9 percent from its Aug. 29 record closing high, exceeding the 20 percent decline considered the threshold for a bear market. The Nasdaq is the first of the three major US stock indexes to cross that threshold, with its drop in less than four months the latest sign that the bull market that began during the financial crisis a decade ago could be almost done. Several other key indexes in recent days have confirmed they were in bear markets, among which are the Russell 2000 small-cap index and the Dow Jones transportation average .DJT. The S&P 500 , the benchmark for US stocks, is not yet in a bear market, though more than 60 percent of its components are. The S&P 500 is down 17.5 percent from its Sept. 20 record high close, while the Dow Jones Industrial Average is down 16.3 percent from its Oct. 3 record. The Nasdaq’s fall reflects a sharp move by investors away from what had been the market’s leaders - the so-called FAANG group of five favourite technology and internet stocks. “It’s the old saying, the generals finally got hit,” said Quincy Krosby, chief market strategist at Prudential Financial in Newark, New Jersey. The latest round of selling, which dragged the Nasdaq down nearly 3 percent to its lowest closing level since August 2017, comes two days after the Federal Reserve raised interest rates for a fourth time this year, as the US central bank continues to unwind the low interest-rate policy that supported stocks for nearly a decade. Concerns of slowing economic growth have also led investors to flee stocks high-valuation sectors such as technology and communication services. In Nasdaq's record-long bull market, which ended with its all-time-high close on Aug. 29, the index gained more than 539 percent from its post-financial-crisis low on March 9, 2009. Including reinvested dividends, it delivered a total return of more than 611 percent in that time. By contrast, in that same period, the S&P 500  gained just 331 percent, with a total return of 425 percent. Even with the drop since late August, Nasdaq is nearly 400 percent above its March 2009 low, with a total return of more than 456 percent. “Nasdaq is your more growth-oriented story, so the biggest stocks are driving the overall market because they’re a bigger chunk of it,” said Kim Forrest, senior portfolio manager at Fort Pitt Capital Group in Pittsburgh. Past Nasdaq bear markets have lasted a long time and cut deeply. For instance, the Nasdaq fell 55.6 percent during its last bear market, which ran from Oct. 31, 2007, to March 9, 2009. Some investors are not convinced the current bull market is over for the S&P 500. Many strategists still are forecasting the S&P 500 will end next year with modest gains. “The market is caught up in this hysteria,” said Ken Polcari, managing principal at ButcherJoseph Asset Management in New York. But “it’s an overreaction,” he said, “and if you’re a long-term investor, the last thing you should be doing right now is selling.”