RAWALPINDI (92 News) – An impressive passing-out parade of 133rd PMA Long Course, Graduate Course 34th, Technical Graduate Course 27th, Integrated Course 51 and Lady Cadets Course 13th was held at Pakistan Military Academy, Kakul on Saturday. The cadets from Kingdom of Saudi Arabia, Palestine, and Libya were also among the passed-out courses. Chairman Joint Chief of Staff Committee (CJCSC) General Rashad Mahmood was the chief guest on the occasion. Addressing the parade, the CJCSC said that today entire nation stands united against terrorism and extremism. “Operation Zarb-e-Azab reflects the unflinching resolve of the Armed Forces and the people of Pakistan to defeat the evil forces of regression. Invaluable sacrifices rendered by the Pak Army, in their fight against terrorism reflect the will and hope of the whole nation. Our officers and men have written some astonishing feats with their blood, of indomitable courage, selflessness, and professional purpose. The whole nation salutes their sacrifices and they shall never be forgotten.” 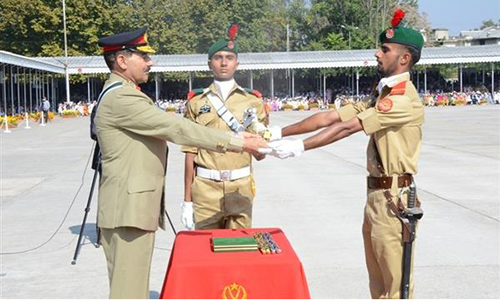 The CJCSC appreciated the high standards of the parade and said that the “esprit de corps” emanating from your dignified pace and pose are reflective of the excellent training and exacting standards of attend at PMA. “The internal and external challenges that Pakistan confronts today are indeed daunting and complex. I, therefore, urge all of you to keep yourself abreast of emerging technologies, new age weapons and concepts of technology-driven warfare,” he added. Earlier, the CJCSC reviewed the parade and  awarded the coveted Sword of Honour to Battalion Senior under Officer Muhammad Waleed. 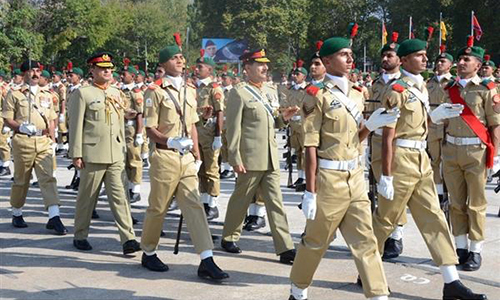