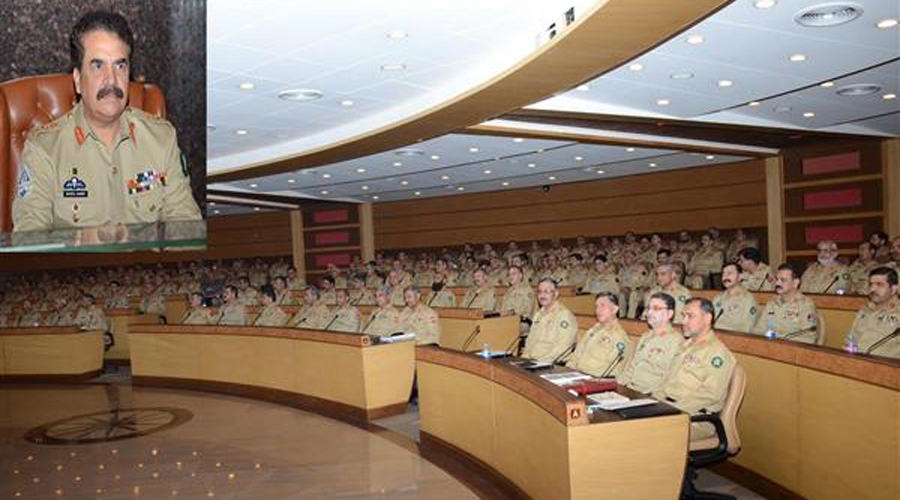 RAWALPINDI (92 News) – A day-long Formation Commanders’ Conference was held at GHQ on Thursday. COAS General Raheel Sharif presided over the conference which was attended by corps commanders, principal staff officers and all formation commanders. The participants were given a comprehensive briefing on prevailing internal and external security situation of the country. The participants also held exhaustive discussion on professional matters. The COAS, in his address while underscoring  multiple and complicated challenges faced by Pakistan, expressed his optimism saying that Pakistani nation has been victim of terrorism for over a decade and sacrificed a lot. “But Alhamdolillah, we have broken the backbone of terrorists turned due to resilience displayed by the nation and professionalism of our armed forces.” Acknowledging the contributions made by officers and men towards making Operation Zarb-e-Azb a success and now successfully transiting into final phases, he said that Pakistan Army will always come up to the expectations of the Pakistani nation. Expressing satisfaction over the pace of return of TDPs, the COAS paid tributes to valiant tribes for their unwavering support in fight against terrorism and emphasized on the quality and speed of rehabilitation and resettlement work in FATA for their dignified and timely return. “We are aware of all hostility being perpetrated against the upcoming Pak China Economic Corridor, which promises to transform the lives of people of Pakistan. We are ready to pay any price to turn this long cherished dream into reality,” vowed the COAS.