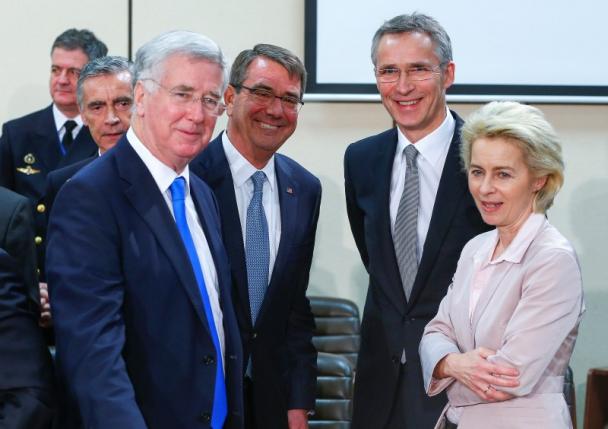 BRUSSELS - NATO agreed on Wednesday its boldest steps yet to deter Russia from any attack in the Baltics or eastern Europe, setting out ways to rapidly deploy air, naval and ground forces without resorting to Cold War-era military bases.

In an effort to dissuade Moscow after its 2014 annexation of Crimea, NATO defence ministers will rely on a network of new alliance outposts, forces on rotation, warehoused equipment and regular war games, all backed by a rapid-reaction force.

"Russia is a threat," Lithuanian Defence Minister Juozas Olekas told Reuters at an alliance meeting in Brussels. "It is Moscow's actions in Crimea, their support for separatists in Ukraine and their snap exercises that concern us".

The measures, which British Defence Minister Michael Fallon said proved that "NATO means what it says", showed a unity the West has not been able to muster against Russia in Syria, where the United States faces criticism for not stopping the Russian-backed assaults on rebel-held areas of Aleppo.

NATO Secretary-General Jens Stoltenberg said he will meet Russian Foreign Minister Sergei Lavrov at the Munich Security Conference later this week to stress the defensive nature of NATO's strategy for the Baltics and eastern Europe. "We believe that especially when times are difficult, as they are now, it's even more important that we have political dialogue, channels open, between NATO and Russia," he said.

Russia denies it has acted aggressively. Moscow blames the West for stirring anti-Russian feeling across the east, particularly in Georgia, Moldova and Ukraine, which it considers its historic sphere of influence. The crisis in Ukraine, where the West accuses Russia of fomenting a separatist rebellion, and the Western economic sanctions on Moscow have raised concerns about a new Cold War.

Non-NATO member Georgia, which fought a five-day war with Russia in 2008 that left two of its regions occupied by Russian military, also warned NATO to be on alert. "With the Kremlin, nothing can be excluded," Tinatin Khidasheli, Georgia's defence minister, told Reuters. "They cannot show weakness."

Poland's new conservative government has been the most vocal in calling for permanent NATO bases on its territory and while Warsaw has now agreed to the new lighter military presence, its defence minister Antoni Macierewicz signalled that difficult talks over troop numbers lie ahead.

Initial discussions suggest NATO could have a brigade of up to 1,000 troops in each of the six former communist countries, once under Moscow's domination, that the alliance is looking to reinforce: Lithuanian, Latvia, Estonia, Poland, Bulgaria and Romania. They will be backed by a rapid-reaction force that includes air, naval and special operations units of up to 40,000 personnel.

Asked about whether a 1,000-troop presence was acceptable, Macierewicz said: "From our point of view it is clearly too little." US Defense Secretary Ash Carter said the plan aimed to move NATO to a "full deterrence posture" to thwart any aggression but cautioned: "It's not going to look like it did back in Cold War days."

In the past, the United States stationed some 300,000 troops in Europe and NATO wants to avoid any such posture because of the costs and also so as not to further antagonise the Kremlin. Britain said it would contribute two warships to a NATO maritime groups this year, sending one frigate to the Baltic. Another difficult issue is the funding for the deterrent, which Stoltenberg has said "does not come for free."

The United States' is seeking a $3.4 billion (£2.3 billion) budget for European reassurance initiatives in 2017, a four-fold increase in Washington's spending in the region to rotate more troops through the region and provide more tanks and other support.

Carter, speaking to reporters travelling with him to Brussels, said it was important for all NATO allies to increase military spending. "I'll be looking for others in NATO to echo (us) in our investment," Carter said. Stoltenberg said he received new commitments from other NATO allies on Wednesday, but said it was too early to give details. -Reuters