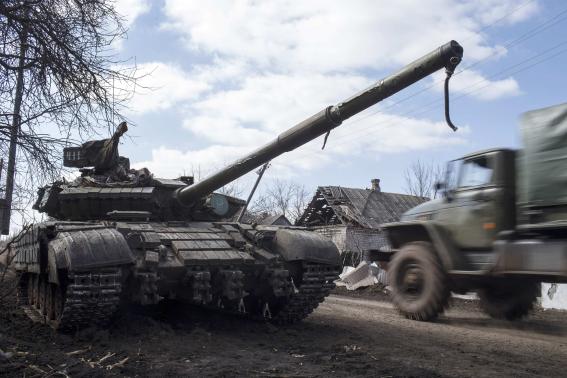 MONS, BELGIUM - NATO Secretary General Jens Stoltenberg said on Wednesday that Russia was still arming and training rebel forces in eastern Ukraine and he called for the warring parties to help foreign monitors to reinforce a ceasefire. Asked at a news conference about a US diplomat's remark that Russian tanks had crossed into Ukraine in recent days, he declined specific comment on that but said: "We ... still see Russian presence and strong support for the separatists in eastern Ukraine. We see the delivery of equipment, forces, training. And so Russia is still in eastern Ukraine. "Therefore we call on Russia to withdraw all its forces from eastern Ukraine and to respect the Minsk agreement." On Tuesday, senior State Department official Victoria Nuland told a US congressional hearing that Russian tanks and artillery had crossed into eastern Ukraine in recent days in breach of a ceasefire deal agreed in Minsk on Feb. 12. Stoltenberg and the top NATO commander, US General Philip Breedlove, told reporters at the alliance's military headquarters in Belgium that their priority now in Ukraine was to see monitors from the Organization for Security and Cooperation in Europe (OSCE) given the safe and free access and comprehensive information they needed to reinforce the truce. Breedlove said NATO could not say if numbers of combatants and weaponry had changed from estimates before the ceasefire because of the difficulties of monitoring movements. It was positive that men and equipment had moved back from frontlines, he said. "But we're not sure where they've been moved." Ukraine's government says rebels have been concentrating armaments in depots near the main eastern city of Donetsk. Stoltenberg said he was concerned that weaponry which was not being monitored could be repositioned for future combat. "Our main message today is that the OSCE needs access," he said. "What we ask for is both freedom of movement ... but also that they get access to necessary information ... The monitoring of ceasefire is by no means sufficient today." - Reuters