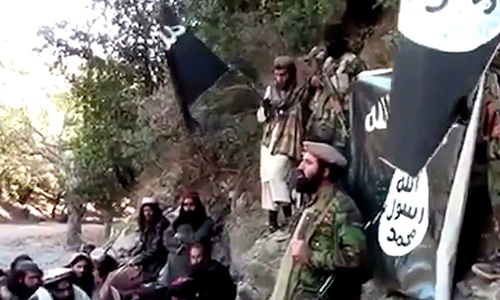 The emergence of fighters loyal to Islamic State has introduced a dangerous new element to Afghanistan's long-running civil conflict, with the group violently challenging the much larger Afghan Taliban movement in pockets of the country.

NATO's Resolute Support mission in Kabul, which is led by the U.S. military, confirmed that American forces carried out two counter-terrorism air strikes in Achin district, but declined to provide further details.

Whether the raid succeeds in silencing the transmissions, which have recently increased from an hour a day to 90 minutes, and are now broadcast in Dari as well as the Pashto language, remains to be seen.

But it reflects intensifying efforts by U.S. forces in the fight against Islamic State, known widely by its derogative Arabic name Daesh, since a special order gave U.S. forces broader authority to strike at IS fighters.

U.S. officials generally provide only bare details of counter-terrorism operations, but the military has confirmed a series of drone strikes in Nangarhar over recent weeks.

According to the Afghan interior ministry, Afghan and international forces have conducted nearly 20 joint operations against Islamic State in Nangarhar over the past month.

"We use airpower of our own and of international forces, which is crucial in defeating Daesh," said Nangarhar police chief Fazel Ahmad Sherzad.

Established mainly in Nangarhar, a province which borders the Federally Administered Tribal Areas of Pakistan, Islamic State has raised its profile in Afghanistan over the past year.

General John Campbell, the American commander of international forces in Afghanistan, said in December that the movement was believed to command no more than 1,000-3,000 fighters in the country.

But he said it had the potential to become a more serious threat if left unchecked.

Combining radical ideology with gruesome tactics including beheadings and at least one instance in which prisoners were killed by being blown up with explosives, it has established a reputation for extreme ferocity and attracted former members of the Afghan Taliban.

Over the past year it has grown in strength, challenging its larger Islamist rival for control of lucrative smuggling routes as well as dominance of the insurgency.

That has complicated the search for peace in Afghanistan by fragmenting forces who are fighting the Western-backed government, which, along with the United States, wants to bring the Taliban to the negotiating table.

One senior Western official, speaking on condition of anonymity, said the potential for Islamic State to radicalize young people who have known nothing but war was a much greater threat than the absolute size of its forces.

The raid on the radio station appears to have been aimed at eliminating an increasingly influential propaganda tool, which had targeted growing ranks of unemployed young men in the region.

Shoffner said that despite its efforts at propaganda and recruitment, there were doubts about whether Islamic State would succeed in communicating its radical message to the traditional tribal culture of Afghanistan.

But he added: "We want to see Daesh contained and not become any more powerful than they currently are." –Reuters