ISLAMABAD (92 News) – Chief of the Naval Staff Admiral Zafar Mahmood Abbasi, who is on an official visit to Romania, called on Romanian Chief of Defence Staff, Chief of the Romanian Naval Forces and also visited DAMEN Shipyards at Galati. Upon his arrival at Naval Headquarters in Bucharest, the Admiral was received by Chief of the Romanian Naval Forces, Vice Admiral Alexandru Mirsu. A ceremonial Guard of Honour was presented to the Naval Chief at the occasion. During the meeting, issues related to regional maritime security and professional interest were discussed. The Naval Chief highlighted Pakistan Navy’s efforts for ensuring maritime security in the region through various peace initiatives and thanked Vice Admiral Alexandru for participation of Romanian Navy in Multinational Maritime Exercise AMAN-19 held at Karachi. 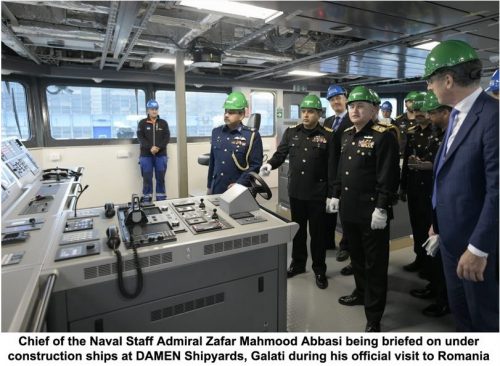 The Romanian Naval Chief appreciated Pakistan Navy’s role in collaborative maritime security. Both the dignitaries looked forward to further enhancing the interaction in diverse fields of naval collaboration. A reception dinner was also hosted by Vice Admiral Alexandru Mirsu in honour of Chief of the Naval Staff. During a separate meeting with Romanian Chief of Defence Staff, Lieutenant General Daniel PETRESCU in Ministry of Defence at Bucharest, issues related to regional security & stability and mutual interest including bilateral military collaboration were discussed. Lt Gen Daniel appreciated contributions of Pakistan in spearheading various initiatives for maintaining peace and stability in the region. Both the dignitaries agreed on further enhancing the bilateral cooperation in diversified military domains. 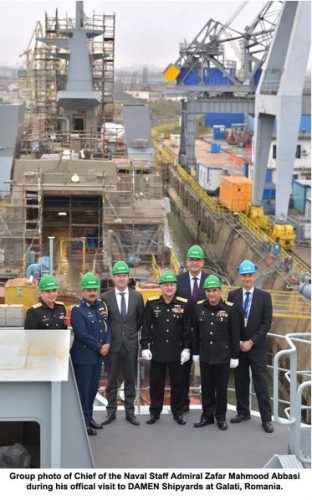 Later, the Naval Chief visited DAMEN Shipyards at Galati where he was received by Managing Director and senior hierarchy of the shipyard. The Admiral was given detailed briefings on progress of Pakistan Navy projects. Thereafter, Chief of the Naval Staff also witnessed the work on under construction Pakistan Navy platforms. The Naval Chief lauded the professionalism of DAMEN Shipyards and cooperation in delivering cutting edge technologies to Pakistan Navy. It is expected that the recent visit of the Naval Chief will further augment and expand defence ties between the two countries in general and navies in particular.

Sri Lanka through to Super 12 after thumping win over Ireland