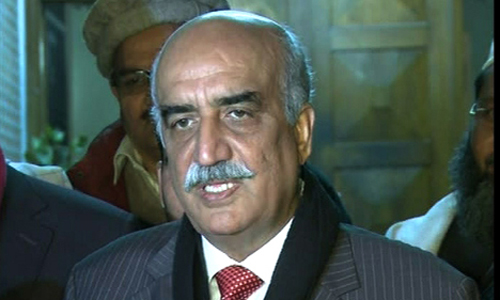 LAHORE (92 News) - Opposition Leader in the National Assembly Khurshid Shah has said that Nawaz Sharif will be bound to dissolve the National Assembly if the Judicial Commission proves the rigging in 2013 general elections. Talking to journalists on Wednesday, he said that the MQM should abolish its armed wing. He said that the Pakistan People’s Party (PPP) had established the civilian dominance of the parliament during its tenure and now Prime Minister Nawaz Sharif should show courage, adding that the opposition will support him. He advised Pakistan Tehreek-e-Insaf (PTI) chairman Imran Khan to return to the parliament. “According to my opinion, Imran Khan is passing through a learning phase,” he said. Khurshid Shah asked politicians to unite for civilian dominance.