ISLAMABAD (92 News) – Pakistan Tehreek-e-Insaf (PTI) chairman Imran Khan has on Tuesday said that the London game plan was obvious now as former prime minister Nawaz Sharif will retain control of Pakistan Muslim League-Nawaz (PML-N). In his twitter message, he said that former prime minister Nawaz Sharif will use PML-N to malign National Accountability Bureau (NAB), Judiciary and military to pressure them for another National Reconciliation Ordinance (NRO). The PTI chairman said that the former PM is desperate for NRO to avoid conviction on money laundering and save his Rs 300bn stashed abroad from being frozen. Khan went on to say that Nawaz Sharif has no concern how much damage he does to the nation to save his ill-gotten Rs 300bn. He said: “Prime Minister Shahid Khaqan Abbasi was rapidly reducing Pak to banana republic.” He is playing poodle to a discredited Sharif and retaining fugitive from justice as Finance Minister, he added. 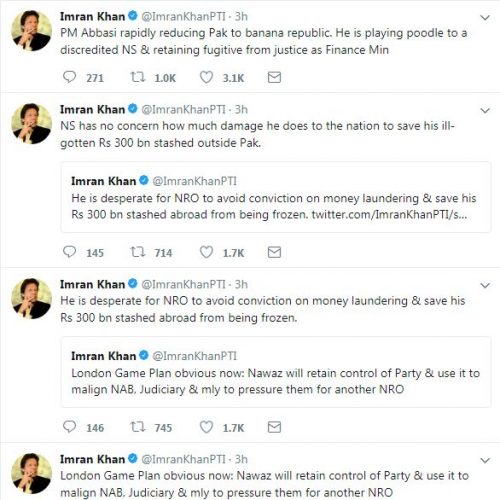