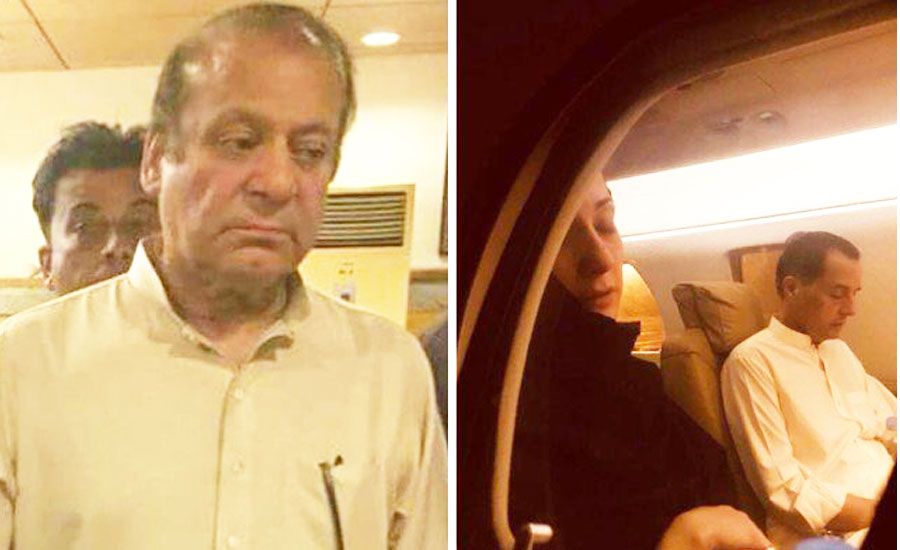 ISLAMABAD (92 News) – Former prime minister Nawaz Sharif, his daughter Maryam Nawaz and son-in-law (r) Captain Safdar have been released on parole from Adiala Jail in Rawalpindi to attend the funeral of Begum Kulsoom Nawaz who expired in London on Tuesday. As per details garnered, after their release, Nawaz Sharif, Maryam Nawaz and Capt (r) Safdar have reached in Jati Umra in Lahore. Initially, they have been released on parole for 12 hours to attend funeral of Begun Kulsoom Nawaz but the duration can be extended later by the Punjab government. Sharif family was shifted to Lahore on special plane arranged by the government. From the Lahore airport the three shifted to Sharif’s residence in Jati Umra under tight security. Nawaz Sharif, Maryam Nawaz and Capt (retd) Safdar will remain within the boundaries of Jati Umra during their 12-hour release on parole. The heavy contingent deployed around the Jati Umra and the Interior Ministry declares Jati Umra as sub-jail. Whereas, Shehbaz Sharif pleaded to the Punjab government for five days parole release application. A day earlier, Begum Kulsoom Nawaz, the wife of former prime minister Nawaz Sharif, passed away after battling cancer in London on Tuesday. The former first lady was being treated at Harley Street Clinic. She was shifted to the ventilator after her condition deteriorated. Her body has been shifted to mortuary of Regent Park Mosque. PML-N president Shehbaz Sharif will leave shortly for London to get the body. She will be buried in Jati Umrah. Former three-time premier Nawaz Sharif and his daughter Maryam Nawaz were informed about her death in Adiala Jail. They continued to watch the news about her death. Capt (retd) Safdar condoled with Nawaz Sharif and Maryam Nawaz. Soon after hearing about the Kulsoom Nawaz’s death, Shehbaz Sharif and Hamza Shehbaz reached Adiala Jail. President Dr Arif Alvi, Prime Minister Imran Khan and Chief of Army Staff General Qamar Javed Bajwa have expressed grief and sorrow over the demise of Kulsoom Nawaz, wife of former three-time premier Nawaz Sharif. Prime Minister Imran Khan said that he is grieved over the death of Kulsoom Nawaz. COAS Gen Qamar Javed Bajwa has expressed his grief and heartfelt condolences to the bereaved family on the sad demise of Begum Kulsoom Nawaz. “May Allah bless the departed soul eternal peace at Heaven – Amen,” COAS said. Chief Justice of Pakistan Justice Saqib Nisar has also expressed grief and sorrow over the death of Begum Kulsoom Nawaz. He prayed may Allah Almighty rest her soul in eternal peace and grant courage to the bereaved family to bear this loss with fortitude. Indian Foreign Minister Sushma Swaraj has also condoled the death of Begum Kulsoom Nawaz. Meanwhile, the Sharif family rejected the Pakistan High Commission’s offer to shift the body of Begum Kulsoom Nawaz. They thanked the Pakistan High Commission for extending cooperation. The Sharif family said that they are making arrangements for shifting the body to Pakistan.