Nawaz, Maryam stop over in Abu Dhabi on their way to Pakistan

Nawaz, Maryam stop over in Abu Dhabi on their way to Pakistan

ABU DHABI (92 News) – Former prime minister Nawaz Sharif and his daughter Maryam Nawaz stopped over in Abu Dhabi on their way to Pakistan from London. As per reports, the Abu Dhabi-bound flight left Heathrow Airport at 12:45am and the plane landed at Abu Dhabi 8am on Friday. The PML-N leaders would stay for seven hours before departing for Lahore. Nawaz and Maryam scheduled to leave Abu Dhabi at 3pm and will land at Lahore's Allama Iqbal International Airport at 6.15 PM on Friday via Abu Dhabi on Etihad Airways flight EY243. 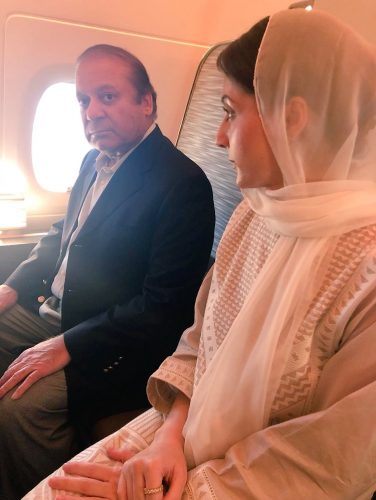 Maryam Nawaz tweeted the video message of Nawaz Sharif in the plane. In a video message, Nawaz urged his supporters to stand with him and change the fate of Pakistan. "The country is at a critical juncture right now," said Nawaz. "I have done what I could. I am aware that I have been sentenced to 10 years and I will be taken to a jail cell straight away. But I want the Pakistani nation to know that I am doing this for you."

Mayam took to Twitter to post pictures of the scenes in London before their departure. In one picture, the father and daughter are seen bidding a teary farewell to Kulsoom Nawaz, who is said to be comatose and admitted at a London hospital.

This picture will be marked as the ugliest face of Pakistani Establishment for a hundred years pic.twitter.com/lZ0H3uW92w

On the other hand, the National Accountability Bureau has arranged two helicopters. One helicopter will be at Lahore Airport, while the other would be in Islamabad, and the father-daughter duo would be arrested upon landing at either of the two airports. Nawaz and Maryam will be arrested on their arrival at Lahore airport from where they will be taken to Islamabad by helicopter so that they can be sent to Adiala jail for imprisonment. Nawaz Sharif and Maryam Nawaz arrived in London before Eidul Fitr and will return to Pakistan on Friday. The return comes a week after the accountability court handed an 11-year sentence to Nawaz and eight years to Maryam in the Avenfield case. Nawaz was also fined eight million and Maryam two million pounds. Maryam’s husband, Captain (retd) Safdar was sentenced to one year.

Today each institution is fighting war of its survival, says Maryam Nawaz

NAB to be boycotted if chairman given extension without consultation: Rana Sanaullah