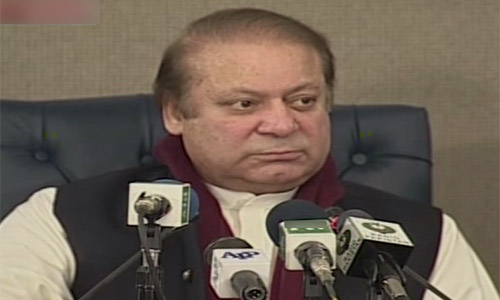 SIALKOT (92 News) – Prime Minister Nawaz Sharif has said that the government is not launching an operation against any party in Karachi. Addressing the Sialkot Chamber of Commerce and Industry (SCCI) on Saturday, he said that the operation is against criminals and it will continue. “Progress has always been made during the democratic rule while the country moved back during the dictator rule. It will take time to overpower the power crisis,” he maintained. The prime minister said that 14,000 megawatts will be added to the system by 2017. “What kind of progress a country lacking gas and electricity will make?” he questioned. “We have decided to generate 3,600 megawatts through liquefied natural gas (LNG). We will also purchase 4,000 megawatts from China.” He claimed that economy has started improving during the present rule. “There is no allegation of corruption against the government.” About the Zarb-e-Azb operation, the prime minister said that they are achieving a big success against terrorists. “Not only the hideouts of terrorists have been eliminated but also their backbone has been broken.” He said that after the construction of Lahore-Sialkot Expressway, the distance between two cities will be just one hour. Later addressing the PML-N Workers’ Convention, the prime minister said that Sialkot is emerging as an international city. “Flights from all over the world are reaching here. The expressway will benefit the public and business community.” Nawaz Sharif said that he has never compromised on principles. “People will see a different picture of the country by the end of our tenure,” he vowed. He also lauded Federal Minister for Water and Power Khawaja Asif, saying that he has always been loyal to the people of Sialkot, while Khawaja Asif and people supported him (Nawaz) during the time of ordeal. [caption id="attachment_10090" align="alignnone" width="500"] 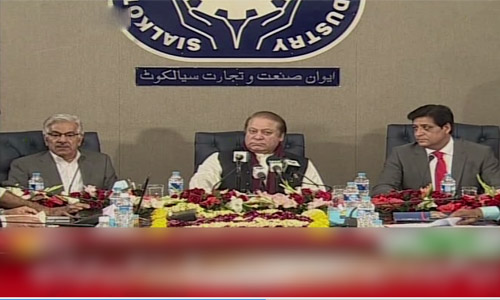 PM Nawaz Sharif presides over a meeting of the Sialkot Chamber of Commerce and Industry.[/caption]