LAHORE (92 News) – Former prime minister Nawaz Sharif has arrived at Jati Umra for Lahore airport from where he will be taken abroad for medical treatment in air ambulance. He was seen off by a large number of supporters and workers, who were gathered outside Jati Umra since morning. Nawaz will be accompanied abroad by his personal physician Dr Adnan Khan and party president Shehbaz Sharif. An air ambulance from Qatar has arrived at the Allama Iqbal International Airport Lahore for shifting former prime minister Nawaz Sharif to London on Tuesday. According to the details garnered, the air ambulance will be given clearance till 12pm.  Nawaz Sharif, former chief minister Shahbaz Sharif and Doctor Adnan will leave for the airport at 9am. They will travel to London in the air ambulance equipped with a fully functional and staffed Intensive Care Unit (ICU) and Operation Theatre (OT). The ambulance will take Nawaz from the Hajj terminal. A team of doctors and paramedics will be on board the air ambulance which is prepared for patients who are unable to board a commercial flight. With the flying fuel of 10 hours and two pilots, the air ambulance will be equipped with oxygen cylinders, ventilators, ICU and other medical facilities, while two doctors, including Sharif’s personal physician Dr Adnan, and paramedics will also assist the PML-N supremo during his travel. The development comes a day after the interior ministry issued a notification, allowing the former prime minister to travel abroad for medical treatment, saying that the decision was an interim arrangement in the light of the LHC's order, which was passed last week. 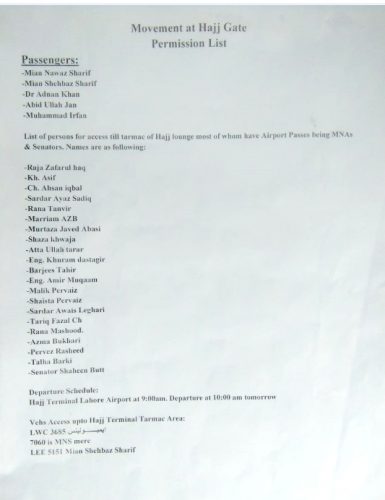 In a statement, PML-N spokesperson Marriyum Aurangzeb said that doctors have completed a medical examination of Nawaz ahead of his departure and he has been administered high doses of steroids and medicines to ensure that his condition remains stable during travel. In its notification, the ministry reproduced the undertakings provided by Shehbaz Sharif and Nawaz to the LHC in which the terms of their travel and return have been laid out. The former prime minister's name remains on the Exit Control List (ECL).