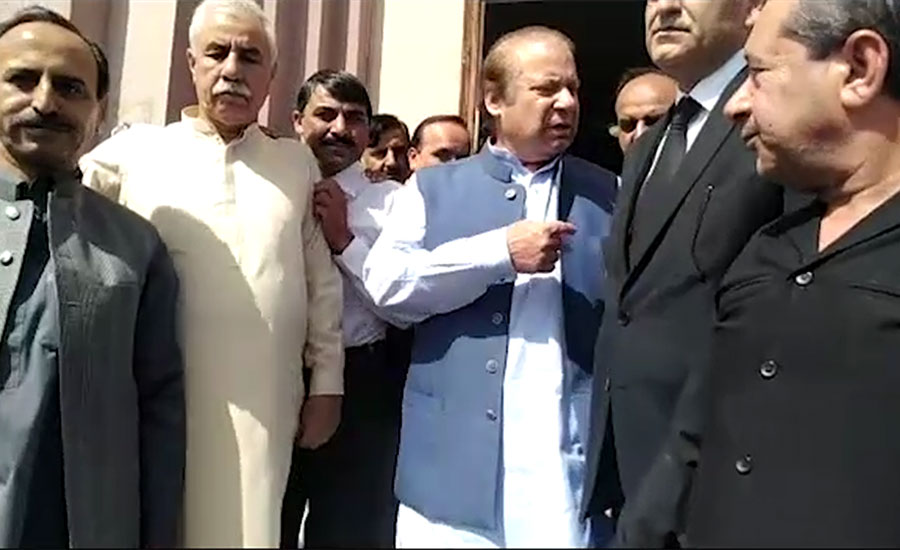 ISLAMABAD (92 News) – Disqualified prime minister Nawaz Sharif on Thursday avoided the questions put by journalists about the address of Prime Minister Imran Khan and the US$12 billion package announced by Saudi Arabia. Speaking to the journalists outside the accountability court, Nawaz Sharif did not break his silence to comment on any issue related to the government. To a question regarding Prime Minister Imran Khan’s speech, he avoided to respond and said that he cannot comment on the PM’s address as he has not watched it. To another question related to financial package from Saudi Arabia, the former premier avoided to comment, saying he watch TV on and off, so he cannot say anything about this financial assistance to Pakistan. Meanwhile, the reporter asked him to say something about PM’s statement regarding not giving NRO to corrupt leaders but the ex-premier refused to answer. On the other hand, former information minister Maryam Aurangzeb also ignored the question about Nawaz Sharif’s silence. Earlier, Prime Minister Imran Khan declared that he would neither spare the corrupt nor give the NRO to anyone. “Corruption is a cancer and we are treating it,” he said. The prime minister said that overseas Pakistanis are ready to invest in the country. “We have to construct five million houses. We will rectify all institutions. Presently the railway, PIA and other state departments are facing losses,” he argued. Imran Khan said that the government will announce a package to end poverty. “It is a matter of happiness that Saudi Arabia has reduced the visa fee on my request,” he said. He said that Musharraf had given the PML-N and the PPP an NRO. “Both parties want to get the NRO, but we will not give it to them,” he declared. He said that the previous government had devoured even the Workers Welfare Fund. “Now the circular debt has touched Rs 1,200 billion,” he said. The prime minister said that the parties criticizing the government should be shameful.