LAHORE (92 News) – Former prime minister Nawaz Sharif departed for London on Tuesday in an air ambulance, accompanied by Pakistan Muslim League-N (PML-N) President Shehbaz Sharif and personal physician Doctor Adnan Khan. The ambulance which arrived early morning at Lahore Airport will travel to Qatar first, from where it will continue its journey towards London. The former premier will reach London at 11:30pm. It was also reported that seven people are travelling with Nawaz, along with his brother Shehbaz and physician Dr Adnan. 21 senior PML-N leaders were at the Hajj Terminal of the Lahore Airport to see off Nawaz Sharif. Raja Zafarul Haq, Ahsan Iqbal, Khawaja Asif, Marriyum Aurangzeb were present at the Hajj Terminal. According to the details garnered,  the air ambulance equipped with a fully functional and staffed Intensive Care Unit (ICU) and Operation Theatre (OT). The ambulance took Nawaz from the Hajj terminal. A team of doctors and paramedics on board the air ambulance which is prepared for patients who are unable to board a commercial flight. The PML-N quid was accompanied to the airport by a large number of supporters as well as party leaders. Nawaz's personal physician Dr Adnan Khan and PML-N President Shehbaz — both of whom are traveling with the former premier. Shehbaz Sharif has appealed to workers for pray for the health of Nawaz Sharif instead of reaching airport to see Nawaz Sharif off. He said that the nation and workers will accord a rousing welcome to Nawaz Sharif when he will return to the homeland after his recovery. With the flying fuel of 10 hours and two pilots, the air ambulance will be equipped with oxygen cylinders, ventilators, ICU and other medical facilities, while two doctors, including Sharif’s personal physician Dr Adnan, and paramedics will also assist the PML-N supremo during his travel. 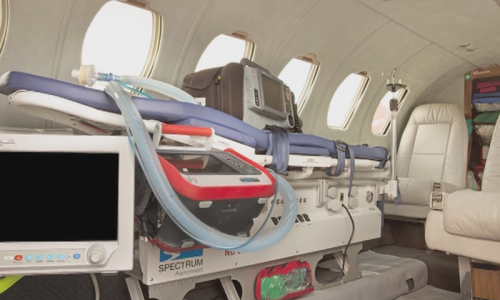 On the other hand, the PML-N workers gathered outside the residence of former premier to see off him at Jati Umra. The preparations have been completed for departing Nawaz Sharif. "Former PM #NawazSharif will travel to London in a high-end Air Ambulance equipped with a fully functional & staffed Intensive Care Unit (ICU) & Operation Theatre (OT). A team of doctors & paramedics will be on board headed by an Intensivist. ETD (LHE): Tuesday 19NOV19 Morning," Dr Adnan tweeted yesterday.

Former PM #NawazSharif is scheduled to travel abroad, to London-UK, for medical treatment within 48 hours once he’s clinically stabilised, made travel-worthy & is safe for air travel. He will make the journey in a fully equipped & medically staffed Air Ambulance; arriving soon.

PML-N spokesperson Marriyum Aurangzeb said that Nawaz Sharif will depart abroad on Tuesday with prayers of 22 crore people. “We shall warmly welcome Nawaz Sharif when he returns to Pakistan after recuperating. The government should turn its focus to serve people instead of getting jealous of Nawaz and Shehbaz Sharif,” she said. She also said that the process of administering a high dose of steroids to Sharif was underway so that his platelet count could be brought to a suitable level for travel. The time from doctors of Harley’s clinic has been sought for the former prime minister. According to the reports, the sons of Nawaz Sharif, Hassan and Hussain Nawaz has booked an air ambulance that will arrive in Lahore on Tuesday and subject to permission of his doctors, Nawaz will leave for London on the same day. The preparations are continued to shift the former prime minister as he will be shifted to US after he seeks initial treatment in the UK Saturday.  He also said that Nawaz will seek treatment for his kidney and heart in the UK. In the US, the former prime minister will be treated for his platelet condition. His brother Shehbaz Sharif and personal physician Dr Adnan Khan are accompanying him as per the existing understanding. It will be decided on Sunday as to who else could also fly with Nawaz. Doctors are currently treating Nawaz Sharif for multiple conditions, including blood pressure, diabetes and the most critical of all Immune thrombocytopenic purpura (ITP), due to which he is not fit to fly. The preparations to send the PML-N quid for treatment were under way on emergency basis, adding that to make him medically fit for travel, the doctors required 48 hours. A PML-N leader said Nawaz Sharif would not fly directly to London. “He would first make a stopover in Dubai or Qatar. “The doctors have advised him not to fly for more than five hours at a stretch,” he added.