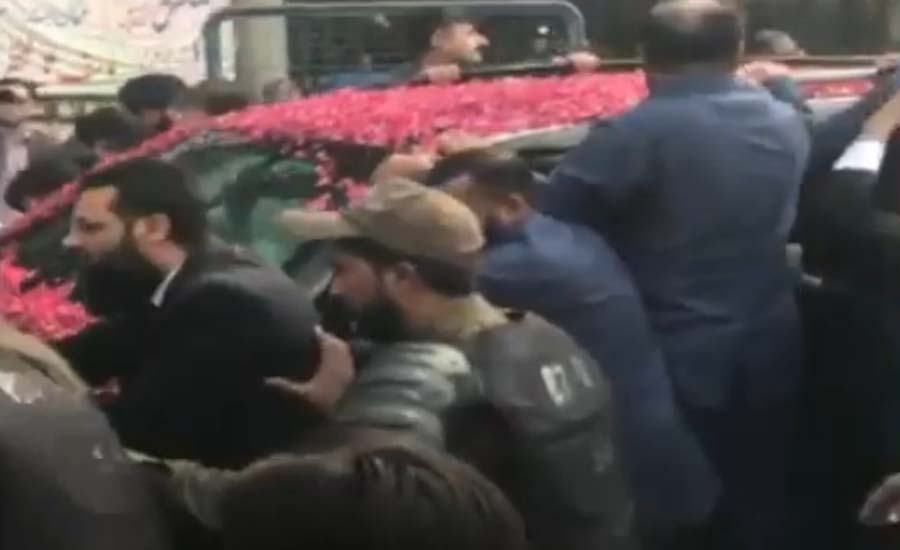 LAHORE (92 News) – Former prime minister Nawaz Sharif has reached  Jati Umrah from Services Hospital on Wednesday. He left the hospital by his personal car instead of the ambulance. The former premier has been discharged from Services Hospital after 16 days. A special medical unit has been established at Jati Umra for the treatment of Nawaz Sharif. He was shifted to Jati Umra on his personal vehicle. Maryam Nawaz was also with her father. Nawaz Sharif has changed his mind to discharge from the Lahore Services Institute of Medical Sciences on Tuesday evening. He spent the night at the hospital as he was earlier discharged from SIMS on his request. Doctors said that there is threat to the life Nawaz Sharif until the treatment of platelets. His sugar level is not under control. Doctors had discharged Nawaz Sharif from Services Hospital yesterday but he stayed in Services Hospital due to a delay in the issuance of the ‘Robkar’ (release order) of his daughter Maryam Nawaz. An ambulance reached Services Hospital to shift Nawaz Sharif but he traveled to Jati Umra on his personal vehicle after a medical check-up was done which showed that his platelet count has further dropped to 30,000. The medical board at Services Hospital has advised to carry out a genetic test of the former premier to diagnose his ailment. Nawaz Sharif was under-treatment at Services Hospital for over 14 days. Earlier on Tuesday, Medical Board chief Prof Dr Mahmood Ayaz said that the genetic test of former premier is not possible in Pakistan. The medical board has suggested to carryout genetic test of Nawaz Sharif to diagnose his illness. Dr Mahmood Ayaz also said that some tests of Nawaz Sharif will be conducted from foreign countries. “No facility is available in Pakistan to treat platelets, heart and block artery under one roof,” he added. However, the doctors allowed Nawaz Sharif to walk and exercise. It is pertinent to mention here that the former prime minister is under-treatment at Services Hospital for over 14 days. The sources said that Nawaz Sharif’s genetic test can also be performed in Pakistan, however, the reports will be finalized within seven days after the test date. They further told that officially samples are being sent to Germany for genetic test two times in a year through Lahore’s Children Hospital. On the other hand, Nawaz Sharif’s medical condition remained unstable as his platelets dropped yet again while under intensive care. The development said that the former premier’s platelets dropped by to an extravagant figure of 10,000. The platelets count currently stands at 30,000 which had formally been restored to 55,000. The sources of the medical board, taking care of Sharif’s health, said that according to the complete blood count (CBC) report blood platelets of the former prime minister are increasing, which suggests improvement in his health.