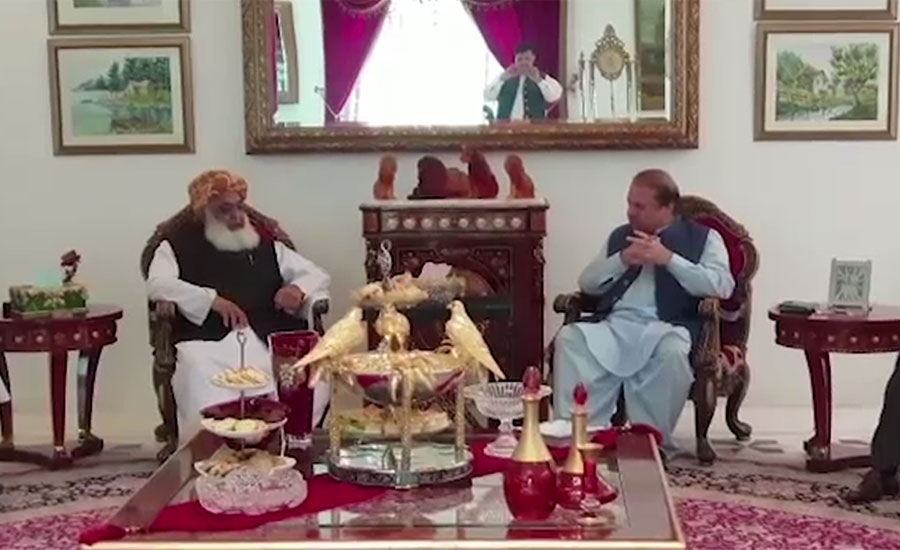 LAHORE (92 News) – Disqualified prime minister Nawaz Sharif on Sunday rejected the invitation to attend All Parties Conference (APC) hosted by Jamiat Ulema Islam-F (JUI-F) chief Maulana Fazlur Rahman. According to the sources, the JUI-F chief met the Pakistan Muslim League-N (PML-N) quid at his Jati Umra residence earlier today for convincing him to attend personally the APC scheduled for October 31. Meanwhile, in the informal meeting, the sources revealed that Maulana Fazl failed to convince Nawaz Sharif for attending the APC. It was also reported that the former prime minister rejected the invitation to attend the APC conference himself despite the JUI-F’s chief repeated requests. However, the sources said that a high-level delegation of the PML-N will attend the conference except Nawaz Sharif. The sources further said that Opposition Leader in the Punjab Assembly Hamza Shehbaz including Zahid Hamid, Rana Tanveer Hussain and the consel of Nawaz Sharif Khawaja Haris, Naseer Bhutta and Azam Nazeer also attended the meeting between Nawaz Sharif and Fazl which lasted two hours. After the meeting, the Maulana Fazlur Rehman left without speaking to the journalists. A day earlier, PPP co-chairman Asif Ali Zardari said they have agreed to attend the APC hosted by Maulana Fazl and he was also willing to meet Nawaz.