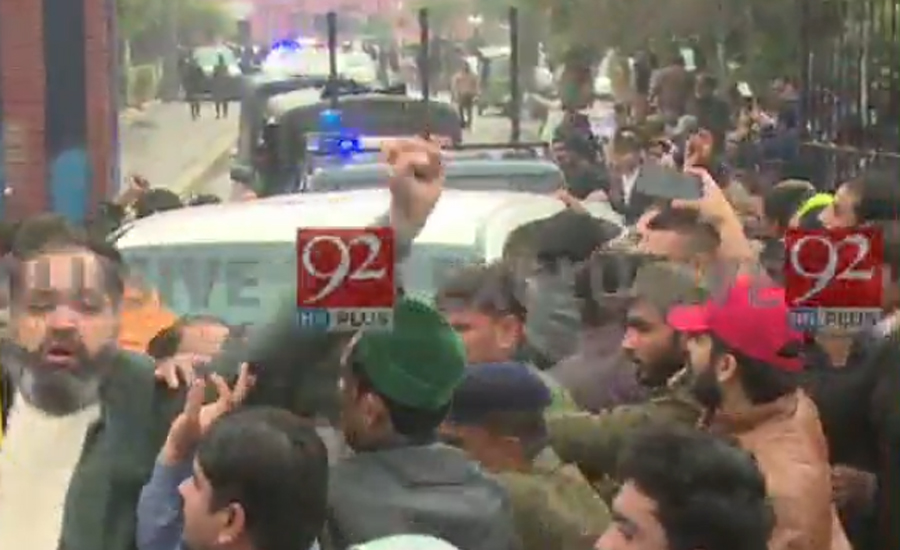 LAHORE (92 News) – Former prime minister Nawaz Sharif, who was sentenced to seven years in the Al-Azizia reference, was shifted to Kot Lakhpat jail from Services Hospital on Thursday. Stringent security arrangements had been made on the occasion. Nawaz remained under treatment in Services Hospital for six days. After conducting different tests, his health was declared satisfactory.

A day earlier, Punjab government spokesperson Dr Shahbaz Gill confirmed that the government cancelled the decision of shifting incarcerated prime minister Nawaz Sharif from Service Hospital to Punjab Institute of Cardiology (PIC). The minister said that the decision was cancelled on the refusal of former prime minister. He also said that the Pakistan Muslim league-N (PML-N) is playing politics on the bad health of Nawaz Sharif. “Sometime Nawaz says he wants to go back into jail and on the other hand he says does not want to go in PIC,” the spokesperson said. He further clarified that the team of doctors will examined the former premier at Service Hospital. Earlier, Nawaz Sharif refused his shifting from Services Hospital to Punjab Institute of Cardiology (PIC). The Interior Ministry decided to shift Nawaz Sharif from Services Hospital to the PIC. The room of the three-time premier would be declared as sub-jail. In its official Twitter, the PML-N said that Nawaz Sharif has asked Medical Superintendent (MS) Services Hospital he did not want to be shifted to PIC, adding that he should be shifted to Kot Lakhpat jail. “I was shifted to PIC before being taken to Services Hospital,” Nawaz told MS. Meanwhile, the security officials are waiting for the new directions from the Interior Ministry.

Maryam says ‘Mian Saheb wants to go back in jail’

Maryam Nawaz, daughter of former convicted premier Nawaz Sharif, said that her ailing father wanted to go back in jail. Maryam Nawaz said while responding to the questions by the journalists during her visit to the hospital. “Nawaz Sharif doesn’t want to stay in hospital for treatment and wants to go back to jail,” she mentioned. She explained while talking to the journalists at the Services Hospital, Lahore where the Nawaz Sharif is currently being treated. Expressing his desire, Pakistan Muslim League-N (PML-N) senior leader Rana Tanveer said, “We want the PML-N supermo should be treated from foreign country.”

On February 2, the three-time prime minister was shifted from the Kot Lakhpat prison to Services Hospital. A medical board constituted to monitor Nawaz's health had recommended that he be shifted to a hospital from prison.