Nawaz Sharif to leave for London on Tuesday

Nawaz Sharif to leave for London on Tuesday

Marriyum Aurangzeb said that the doctors conducted a thorough examination of Sharif today and also held discussions on how to make the PML-N supremo ready for his travel. She also urged the nation to pray for the PML-N supremo’s health on party’s twitter account.

According to the reports, the sons of Nawaz Sharif, Hassan and Hussain Nawaz has booked an air ambulance that will arrive in Lahore on Tuesday and subject to permission of his doctors, Nawaz will leave for London on the same day. 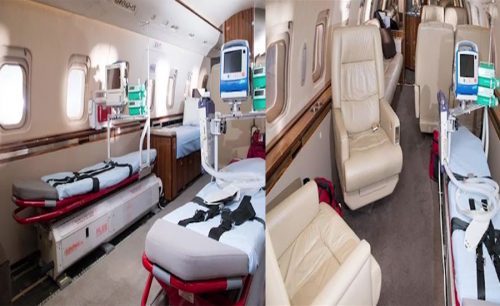 The preparations are continued to shift the former prime minister as he will be shifted to US after he seeks initial treatment in the UK Saturday.  He also said that Nawaz will seek treatment for his kidney and heart in the UK. In the US, the former prime minister will be treated for his platelet condition. His brother Shehbaz Sharif and personal physician Dr Adnan Khan are accompanying him as per the existing understanding. It will be decided on Sunday as to who else could also fly with Nawaz. Doctors are currently treating Nawaz Sharif for multiple conditions, including blood pressure, diabetes and the most critical of all Immune thrombocytopenic purpura (ITP), due to which he is not fit to fly. The preparations to send the PML-N quid for treatment were under way on emergency basis, adding that to make him medically fit for travel, the doctors required 48 hours. A PML-N leader said Nawaz Sharif would not fly directly to London. “He would first make a stopover in Dubai or Qatar. “The doctors have advised him not to fly for more than five hours at a stretch,” he added. A day earlier, the Lahore High Court (LHC) ordered to remove the name of former premier Nawaz Sharif from the ECL and allowed him to go abroad for four weeks unconditionally. The permission can be extended. The case has been adjourned until third week of January. A two-member bench headed by Justice Ali Baqir Najafi heard the plea. The hearing was twice adjourned for 15 minutes. Justice Ali Baqir Najafi remarked that the affidavit of Nawaz Sharif is appropriate. “The court allowing Nawaz Sharif to go abroad after getting affidavit from Nawaz and Shehbaz Sharif,” he remarked. The court ordered Ashtar Ausaf to amend the content of the affidavit. The state counsel said that Nawaz Sharif will have to pay the fine if he does not return. Before announcing the verdict, the court gave the draft of the affidavit to both parties. The counsels for Shehbaz Sharif accepted the draft. The state lawyer opposed it, saying no guarantee has been sought in it. Justice Ali Baqir remarked that whether the undertaking being submitted in court is not correct. “The contempt of court can be applied if the undertaking was not acted upon,” he ruled.