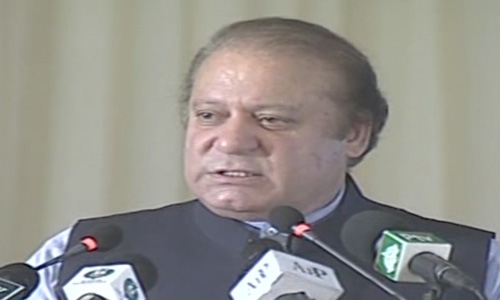 KARACHI (92 News) – Prime Minister Nawaz Sharif has said that he will restore peace in Karachi at all costs. Addressing a meeting at PAF’s Faisal Base on Wednesday, he said that prosecutors are being appointed to pursue the cases in courts. He added that the process of equipping the police with modern equipment and providing manpower to Anti-Terrorism Force will be completed next month. The prime minister appreciated the performance of law-enforcement agencies and assured them of full cooperation. Corps Commander Karachi Lt-Gen Naveed Mukhtar and DG Rangers Maj-Gen Bilal Akbar briefed the prime minister about the city’s law and order situation. Sindh Chief Minister Syed Qaim Ali Shah was also present in the meeting. Earlier addressing a ceremony at Karachi Stock Exchange, he said that security forces have broken the network of terrorists and the government will leave no stone unturned to wipe out terrorists from Karachi. “The Karachi operation was launched after consulting all the parties.” The prime minister said that Pakistan wants cordial relations with Afghanistan and India. He said: “We want to wipe out terrorism. Why were these challenges not tackled before?” he questioned. Nawaz Sharif claimed that the power crisis will be overcome by 2017. “We are trying to complete the Bhasha Dam. The government will set up coal, solar and LNG factories to overcome the power crisis.” He said that their objective is not only to overcome the power crisis but also reduce its rates and chalk out a strategy for next 25 years. He said that the operation against terrorists is very successful. “We have been taking our job seriously and will continue to take it seriously,” he added. The prime minister said that it is his promise to save the people of Karachi and he will fulfil it. “The Karachi operation is not against any party. It is only against criminals.” He said that they will defeat the people who imposed a war on Pakistan. He said that the government will improve conditions in Balochistan. “Gawadar Dry Port will be constructed.”