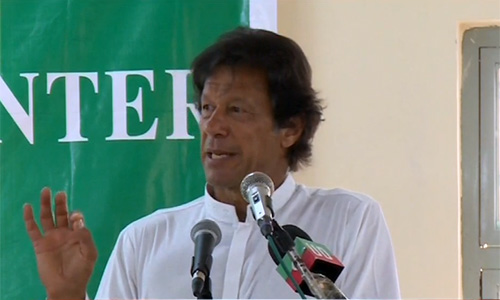 MARDAN (92 News) – Pakistan Tehreek-e-Insaf (PTI) chairman Imran Khan has said that Prime Minister Nawaz Sharif will soon see a new Khyber Pakhtunkhwa. Speaking at the inauguration of the Revenue Department’s Land Record Computerization section in Mardan on Saturday, he said that the nations do not progress by constructing roads and motorways. He said that the people of Mirpur will bury the status quo forever on Sunday. The PTI chairman said that the PPP and the PML-N have taken several turns, but none of them tried to improve the system. He said that the PTI government was making efforts to improve the system by establishing complaint centres in the province. “We will bring the poor out of the vicious circle of police stations and courts,” he said. Imran Khan said that land will be computerized in all the districts of Khyber Pakhtunkhwa by 2017.