ISLAMABAD (92 News) – Former prime minister Nawaz Sharif’s special adviser and senior journalist Irfan Siddique acquitted by the Islamabad High Court (IHC) in a case pertaining to violation of Tenancy Act on Friday During the hearing, the police submitted an official report asking the court to discharge the accused from all allegations. Justice Amir Farooq thoroughly examined the police report and disposed of the plea seeking dismissal of the case. Meanwhile, Lawyer of Irfan Siddiqui has requested the court to issue directives for action against the administration. It will be appropriate if court mentions about the role of administration in the case in its decision, he added. Irfan Siddiqui demanded that those who built the case against him should be tried for the sensational accusations, to which justice Amir Farooq rebutted that he held it within his rights to file a request on the matter which will then be taken into consideration by the court. It is pertinent to mention here that Irfan Siddique was booked under tenancy law violations act of the penal code alleging that he had rented out his house without informing the police. The case was registered under Section 188 at the Ramna police station. Another man named Javed Iqbal, who was a tenant at the house, was taken into custody along with Siddiqui. Earlier, Irfan Siddiqui was granted post-arrest bail by an Islamabad judge on Sunday in tenancy act case. Irfanul Haq Siddiqi  was arrested by Ramna police on Friday night and was booked in a case under Section 188 of Pakistan Penal Code (PPC). Judicial magistrate Mehreen Baloch accepted post-bail request with direction to submit Rs20,000 surety bonds. Siddiqi’s counsel left for Adiala Jail with release orders. According to police, Siddiqi had violated Section 144 imposed in the federal capital by not getting the record of his tenant registered with the police. 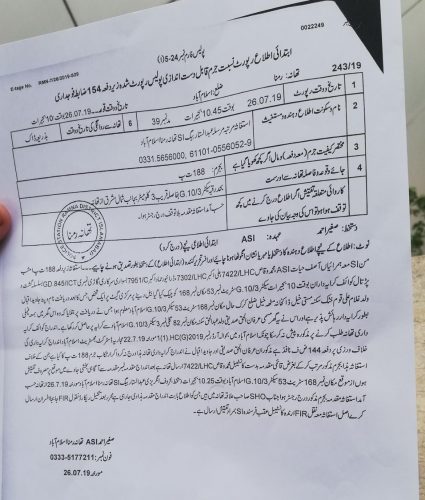 Siddiqi has rented his residential property situated in Sector G 10/3 Islamabad to one Javed Iqbal. In morning he was brought to the office of judicial magistrate Mehreen Baloch on Saturday who listened both sides. Siddiqi submitted application for post-arrest bail through his counsel. Police asked for physical remand of Siddiqi. The magistrate later rejected the pleas of physical remand and post-arrest bail and ordered to send Siddiqi to Adiala Jail on 14-judicial remand. Ms Baloch also issued notice to police on post-arrest bail application. The hearing will be resumed on July 29 to decide the application’s fate.

ISLAMABAD (92 News ) – State Minister for Information and Broadcasting Furrukh Habib has said that the Sharif family is hampering the appeals for last three years.

ISLAMABAD (92 News) – The Islamabad High Court (IHC) on Monday ordered to put the matter pertaining to a ban on TikTok before the federal government.

Govt statements based on political hatred are against dignity of Pakistan: Shehbaz Sharif

ISLAMABAD (92 News) – Opposition Leader in the National Assembly Shehbaz Sharif has said that the government statements based on political hatred are against the dignity of Pakistan.

Nawaz Sharif can't live in UK on pretext of his illness: Shahzad Akbar

ISLAMABAD (92 News) – Adviser to the Prime Minister on Accountability Shahzad Akbar has said that Nawaz Sharif cannot live in the United Kingdom on the pretext of his illness whether someone weeps or cries.

LAHORE (92 News) – PML-N vice-president Maryam Nawaz has said that the government has been mentally defeated by party Quaid Nawaz Sharif.

LONDON (92 News)– Former prime minister Nawaz Sharif’s troubles seem far from over as the British authorities have turned down his request for an extension in his visa.