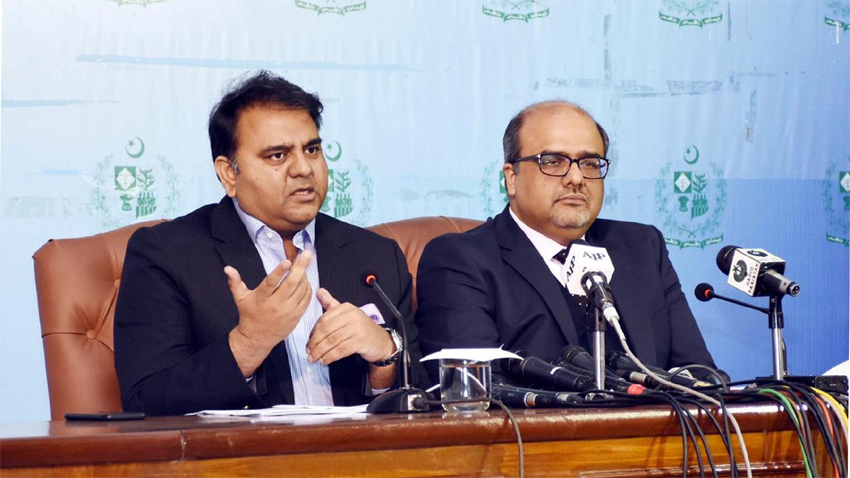 ISLAMABAD (92 News) – Information Minister Chaudhry Fawad Hussain has said that the people who are defending former premier Nawaz Sharif should be ashamed of themselves. Addressing a press conference along with Special Assistant to Prime Minister on Accountability Shahzad Akbar after accountability court’s verdict, the minister said that the minister said that an accountability court was sentenced to seven years in prison in Al-Azizia reference while the court acquitted him in Flagship reference on technical basis. Fawad Chaudhry said that Nawaz Sharif’s sons are disobedient as they didn’t even come to the country to defend their father. “This scene is same like to ‘Day of Judgment’ that the children are saying that we do not know the father and father is inclined to accept the children. Both are pronouncing that it’s all of grandfather,” he said. “Those defending the former premier should be ashamed of themselves because the money involved in the scandal belongs to the people of Pakistan,” he added. The information minister termed the recent accountability court’s verdict against Nawaz as ‘historic’. He said that the real faces of Nawaz Sharif and Asif Alli Zardari have been exposed in front of the nation. He further said that both are the ‘Thug of Pakistan’. Fawad Ch said both of them are involved in plundering national wealth trough kickbacks in mega projects. He said the proceeds of white collar crimes were laundered abroad through fake bank accounts. “In 1992 a law was made that the source of money won’t be asked for the funds coming from abroad, but according to the NAB law section 9 its mandatory to prove the source of income,” the minister said. He said that Nawaz failed to give money trail to the parliament or before the court of law. “Fake companies were made for money laundering,” he added. On the occasion, Shehzad Akbar said that the joint investigation team (JIT), formed by the Supreme Court to probe money laundering of Omni Group, has prepared and submitted a comprehensive report to the apex court revealing astonishing facts about plundering country s wealth. He said Omni Group was given a loan of Rs54 rupees in violation of rules. He said over eleven thousand acres of Sindh Government s land was illegally handed over to Bahria Town on the behest of Asif Ali Zardari. The special assistant said that the JIT has recommended filing of 16 references against the Omni Group. “The JIT probed 11,500, interviewed 924 individuals, and examined 24,500 cash transactions,” he said and added Omni Group operated 32 fake accounts. Shahzad Akbar further said that that the JIT report also revealed direct involvement of Sindh Chief Minister Murad Ali Shah in the whole corruption scandal.