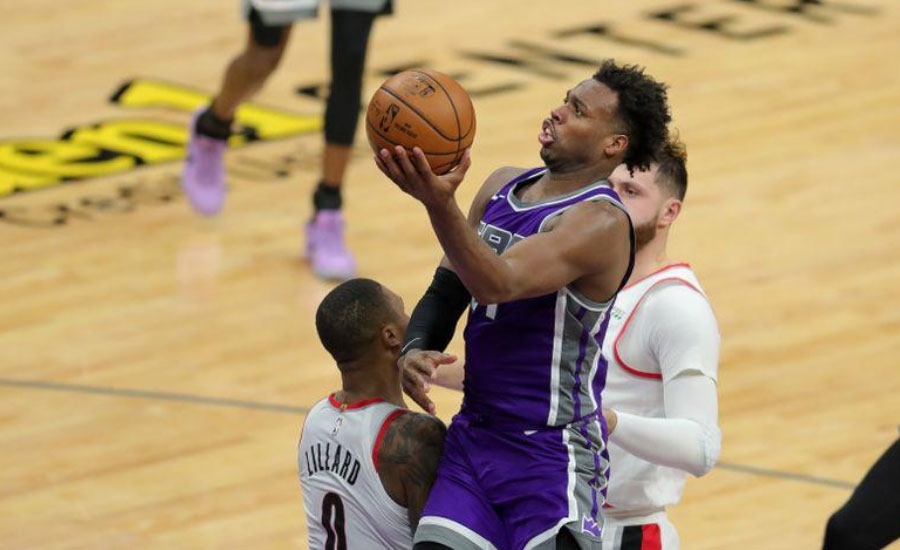 NEW YORK (Reuters) - Damian Lillard established season bests of 40 points and 13 assists and the Portland Trail Blazers rallied from a 19-point, third-quarter deficit to notch a 132-126 victory over the host Sacramento Kings on Wednesday night.

CJ McCollum contributed 28 points, 10 assists and seven rebounds as Portland won its season-best fourth straight game. Lillard and McCollum each made six 3-pointers for the Trail Blazers, who were 23 of 48 from behind the arc and shot 48.9 percent overall.

De’Aaron Fox had 29 points and Buddy Hield made a season-best eight 3-pointers while scoring 26 points for the Kings, who lost for the sixth time in the past eight games.

Everyone in uniform except DeAndre Jordan and Chris Chiozza scored at least 10 points for the Nets hours after the team reportedly agreed to acquire James Harden from the Houston Rockets in a blockbuster four-team trade.

Bruce Brown had 15 points and 14 rebounds for the Nets while Joe Harris also scored 15 points. Julius Randle scored 30 points for the Knicks, who have lost four straight. RJ Barrett had 20 points while Mitchell Robinson added 10 points and 12 rebounds.

LeBron James scored 26 points as Los Angeles improved to 7-0 on the road, a first for the franchise, with a blowout win at Oklahoma City.

The Lakers, who led from start to finish, have trailed for just 11 seconds over the past three games combined. James hit a season-high five 3-pointers, Montrezl Harrell added 21 points and Anthony Davis scored 12 of his 18 points in the first quarter.

The Thunder have lost all five home games this season, their worst start at home since 2007. The franchise, in its final season in Seattle, started 0-7 at home that season. Shai Gilgeous-Alexander led Oklahoma City with 17 points.

Giannis Antetokounmpo recorded his 20th career triple-double with 22 points, 10 rebounds and 10 assists and visiting Milwaukee extended its winning streak over Detroit to 14 games.

Jrue Holiday had 21 points, six rebounds, five assists and three steals for the Bucks, who defeated the Pistons for the third time this season. The 14-game streak, which includes postseason games, began during the 2018-19 season.

Paul George had 27 points, six rebounds and six assists for the Clippers. George hit 5 of 9 3-pointers and 8 of 16 shots from the floor. Patrick Beverley added 10 points and six rebounds.

Nickeil Alexander-Walker scored a career-high 37 points on 15-of-23 shooting, including 5 of 8 from 3-point range, for the Pelicans. Brandon Ingram collected 22 points and six rebounds for New Orleans, which played without Zion Williamson (health and safety protocols), Lonzo Ball (knee) and Eric Bledsoe (eye).

Luka Doncic collected 34 points, 13 rebounds and nine assists to lift Dallas past host Charlotte, which lost Gordon Hayward to a hip injury in the third quarter.

Doncic made 5 of 9 shots from 3-point range to send the Mavericks to their fourth straight win overall and fourth in a row in Charlotte. Tim Hardaway Jr. had 18 points and Kristaps Porzingis added 16 while making his season debut for Dallas.

Kyle Anderson connected on back-to-back 3-pointers during an eight-point run midway through the fourth quarter that propelled Memphis past Minnesota in Minneapolis.

Jonas Valanciunas led the way with 24 points and a game-high 16 rebounds for Memphis, which won its third straight, including second in a row on its current three-game trip. Grayson Allen finished with 20 points, and Brandon Clarke added 19.