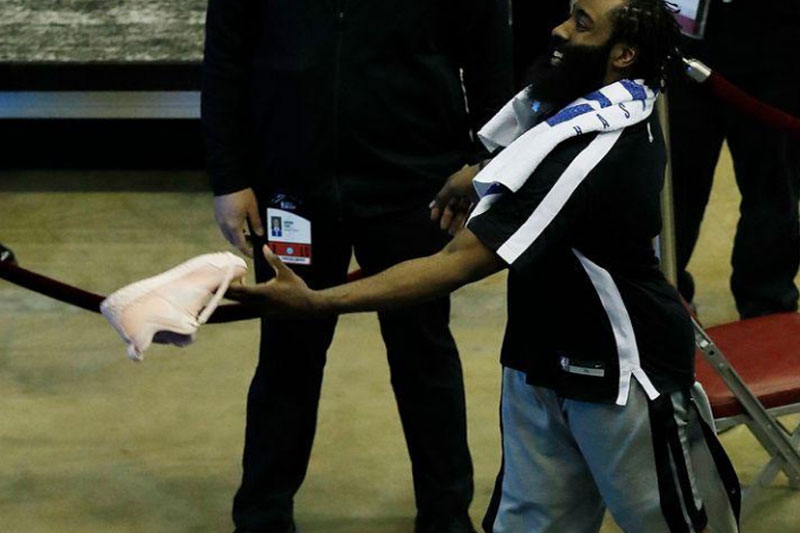 James Harden recorded his eighth triple-double of the season in his return to Houston, leading the Brooklyn Nets to a 132-114 win and handing the Rockets their 13th straight loss.

Harden finished with team highs in points (29) and assists (14) while adding 10 rebounds and three steals. Two nights after becoming the first player to record a 30-point, 10-rebound and 15-assist triple-double without a turnover, Harden committed eight giveaways against Houston.

John Wall finished with a season-high 36 points for the Rockets. Victor Oladipo added 33 points, including 18 in the third quarter. Kyrie Irving finished with 24 points and six assists, and Bruce Brown added 17 points, eight rebounds and seven assists for the Nets.

Joel Embiid scored 40 points and grabbed 19 rebounds to lift host Philadelphia past Utah in overtime. The Sixers capitalized on a late 8-0 run in OT to seal the victory.

It was the fifth game this season that Embiid posted at least 40 points and 10 rebounds in a game. Tobias Harris scored 11 of his 22 points in overtime to go along with 10 rebounds, and Ben Simmons added 17 points.

Donovan Mitchell led the Jazz with 33 points and eight rebounds but was ejected in the final minute of overtime after receiving his second technical foul.

Damian Lillard swished a 29-foot 3-pointer with 14 seconds remaining, then took a charging foul on Draymond Green to negate a potential game-tying hoop with 4.1 seconds left, allowing host Portland to overtake and then hold off Golden State.

Lillard finished with 22 points to tie Carmelo Anthony for team-high honors for the Trail Blazers, who won a second straight after losing four in a row. Robert Covington and Gary Trent Jr. added 15 points apiece, and Enes Kanter recorded 11 points and 14 rebounds for Portland.

Stephen Curry totaled a game-high 35 points for the Warriors, who lost a second in succession after three straight wins. Golden State played without Kelly Oubre Jr., who sprained a wrist at practice Tuesday.

Harrison Barnes scored the decisive basket with 30.1 seconds left to help Sacramento wrap up a victory over visiting Los Angeles.

Buddy Hield registered 29 points, six rebounds and six assists as Sacramento won for just the second time in the past 12 games. De’Aaron Fox had 23 points and eight assists before fouling out, and Barnes scored 20 points.

Dennis Schroder had season highs of 28 points and nine assists for Los Angeles, which played without LeBron James (ankle) for the first time this season. Montrezl Harrell matched his season high of 26 points and collected 12 rebounds while Kyle Kuzma scored a season-best 25 points and grabbed a season-high-tying 13 rebounds.

T.J. McConnell collected 16 points, 13 assists and a franchise-best 10 steals to lift Indiana to a victory at Cleveland.

McConnell, who made all eight of his shots from the floor, set an NBA record with nine steals in the first half. The league record for steals in a game is 11, shared by the San Antonio Spurs’ Larry Kenon (1976) and the New Jersey Nets’ Kendall Gill (1999).

Malcolm Brogdon scored 29 points for the Pacers, who salvaged the finale of a four-game road trip by snapping a season-high-tying, four-game losing skid. Collin Sexton recorded 32 points and 10 assists for the Cavaliers, who squandered a 17-point lead in the second half and saw their season-high four-game winning streak end.

Kristaps Porzingis and Tim Hardaway Jr. scored 19 points each to lead host Dallas to a win over Oklahoma City. It was the lowest-scoring game of the season for both teams.

Shai Gilgeous-Alexander led Oklahoma City with 15 points, going just 5 of 15 from the floor. Darius Bazley had 11 points and 10 rebounds.

Wayne Ellington scored a season-best 25 points while going 8-for-11 from 3-point range and visiting Detroit defeated depleted Toronto in Tampa.

Zion Williamson scored 28, JJ Redick had 22 and Brandon Ingram scored 21 for the Pelicans.

Trae Young scored 32 points and made the two winning free throws with eight seconds remaining, and Atlanta completed a 19-point, second-half comeback to earn a victory at Orlando.

The Magic had a chance to win it when Terrence Ross missed a runner with 1.3 seconds left, and Atlanta’s John Collins grabbed the rebound. Collins was fouled and made both free throws to seal the victory.

Danilo Gallinari was forced to start at center for the Hawks when Clint Capela was idled by a sore foot, and he came up with 23 points, nine rebounds and six assists. The Magic got 29 points and nine rebounds from Nikola Vucevic and 28 points from Ross.

Terry Rozier scored 31 points and Gordon Hayward returned to Charlotte’s starting lineup as the Hornets picked up their most lopsided win of the season, a blowout of Minnesota in Minneapolis.

Hayward finished with 23 points, nine assists, five rebounds and five steals in 31 minutes after missing Charlotte’s prior two games with a bruised hand. However, the Hornets’ P.J. Washington exited due to a right ankle sprain in the fourth quarter.