LAHORE (92 News) – The 2nd Chief of the Naval Staff All Pakistan Hockey Tournament was played at National Hockey Stadium,  Lahore October from 1-7. Eight top national teams, including WAPDA, NBP, SNGPL, SSGC, PN, PAF, Punjab Police and PQA, competed for the title. The final of the championship was played between National Bank of Pakistan and WAPDA. After a sensational match National Bank of Pakistan won the laurels, whereas, WAPDA and SNGPL secured 2nd and 3rd positions respectively. Vice Admiral Kaleem Shaukat, Vice Chief of Naval Staff, graced the occasion as chief guest of the ceremony held at National Hockey Stadium Lahore and distributed trophies and medals among the winner teams.National Bank of Pakistan received a cash prize of Rs 500,000 for winning the championship. WAPDA and SNGPL won Rs 300,000 and Rs 200,000 for securing 2nd and 3rd position respectively. Rashid Mahmood (Pakistan Navy)    was declared as the best player of the tournament and awarded Rs 50,000. Aleem Bilal (WAPDA) and Ali Umair (SNGPL) were declared the best scorer and the best goal keeper respectively and were awarded the cash prize of Rs 25,000 each. 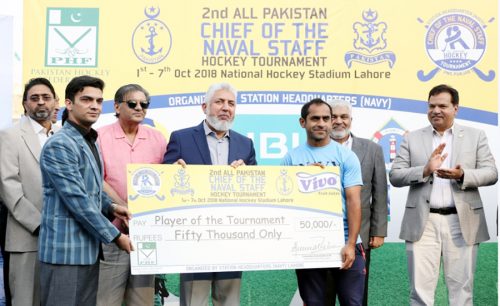 The chief guest congratulated the winning teams and applauded the efforts put in by the Patron PN Hockey (Central), Punjab Sports Board (PSB), Pakistan Hockey Federation (PHF) and sponsors. He hoped that this tournament will certainly contribute to highlighting the public interest in the national game. While interacting with the media, Vice Chief of Naval Staff appreciated the role played by the media in the promotion of sports, especially the wide coverage given to 2nd Chief of the Naval Staff All Pakistan Hockey Tournament 2018. Vice Admiral Kaleem Shaukat also urged the public and private departments/ organizations to come forward and help in revival of the national games. Pakistan Navy has always strived for the promotion of sports in the country. Keeping in view the glorious past of Pakistan hockey, Pakistan Navy stands committed to contributing towards bringing back our lost glory in the field of hockey. Therefore, Pakistan Navy has taken an initiative for the revival of the national game in collaboration with the Pakistan Hockey Federation. A large number of dignitaries, including legend hockey players and students from school/ colleges/ universities, witnessed the matches.