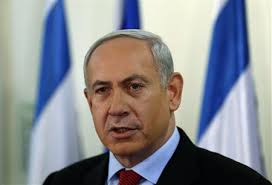 JERUSALEM - Israeli Prime Minister Benjamin Netanyahu said on Wednesday it was not too late for world powers still locked in nuclear negotiations with Iran to demand a "better deal". He made the comments before a planned meeting in Jerusalem with the speaker of the US House of Representatives, John Boehner, a leading Republican and strong critic of the White House's policy on Iran. "Now is the time for the international community to insist on a better deal," Netanyahu said in a televised statement delivered in English. "A better deal would significantly roll back Iran's nuclear infrastructure. A better deal would link the eventual lifting of the restrictions on Iran's nuclear program to a change in Iran's behavior," he said, citing threats to annihilate Israel and accusing Tehran of fomenting regional conflict. Netanyahu said on Tuesday that a framework agreement sought by international negotiators to rein in Iran's nuclear program would leave it with the capability to develop atomic weapons within a year. Six world powers and Iran went beyond a midnight deadline and were continuing to negotiate in the Swiss city of Lausanne on Wednesday, having failed to agree on crucial details such as the lifting of UN sanctions. Boehner, whose invitation to Netanyahu to address Congress drew accusations that both men were pursuing partisan politics at the expense of traditional bi-partisan support for Israel in Washington, has kept his visit to Israel low-key. He was due to speak to reporters, alongside Netanyahu, later in the day at the prime minister's office. Congress has cautioned it would consider imposing new sanctions on Iran if there was no agreement in Lausanne this week. President Barack Obama has threatened to veto any such sanctions moves. Senate Majority Leader Mitch McConnell has said that if a framework deal is reached, lawmakers would consider a bill that would require Obama to submit a final accord for Congress’ approval. - Reuters