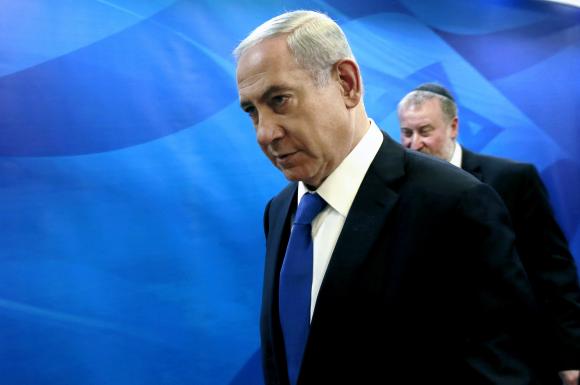 JERUSALEM - Israeli Prime Minister Benjamin Netanyahu's office denied reports on Sunday he has backed away from a 2009 commitment to seek a two-state peaceful solution with the Palestinians. A statement by Netanyahu's right-wing Likud party widely reported by Israeli media said he had said that a speech he gave six years ago agreeing for the first time to Palestinian statehood as a solution to decades of conflict was now "irrelevant." Netanyahu "never said such a thing," his office said in a statement responding to the reports. Likud had apparently issued the remarks to debunk earlier Israeli media reports suggesting Netanyahu had in a previous term of office negotiated a broad withdrawal from land Israelcaptured in a 1967 war. The party's statement, apparently issued by hardliners, said Netanyahu had also suggested "there would be no withdrawals or concessions, that this is simply irrelevant," referring to swapping any occupied land for peace. Netanyahu's office denied this, too, saying he has long adhered to a policy that "under current conditions in the Middle east any land that is handed over would be grabbed by Islamist extremists." The Israeli leader had repeatedly said he would not hand over land at risk of falling into the hands of Islamist extremists since the collapse of peace talks in April and after fighting a July-August war with Hamas militants in Gaza. The media accusations against Netanyahu over the Palestinian conflict come as part of a bitterly fought campaign for a March 17 election. Polls show Netanyahu running neck and neck with leading rival Isaac Herzog of the left-of-center Zionist Union, which says it would seek a resumption of regional peace talks. -Reuters