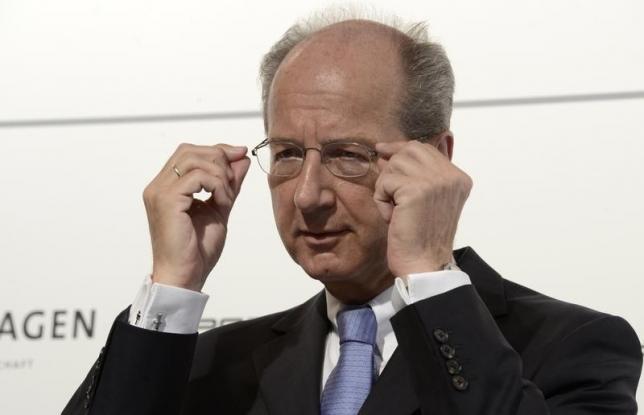 BERLIN - Hans Dieter Poetsch, the incoming chairman of Volkswagen (VW)(VOWG_p.DE), sees the scandal around the rigging of emissions tests as a threat to the firm's viability albeit a surmountable one, a newspaper quoted him as saying. At an internal company meeting this week at the VW headquarters in Wolfsburg, Poetsch described the situation as an "existence-threatening crisis for the company", Germany's Welt am Sonntag reported in a release ahead of Sunday's publication. Poetsch also said that he believed VW could overcome the crisis, the newspaper said. A VW spokesman declined to comment on the report. Europe's largest carmaker has admitted cheating in diesel emissions tests in the United States and Germany's transport minister says it also manipulated them in Europe, where VW sells about 40 percent of its vehicles. VW has set aside 6.5 billion euros ($7.3 billion) to help cover the cost of the scandal, but some analysts think the final bill could be much higher. Moody's, S&P and Fitch have all put negative outlooks on their credit ratings, meaning they see a risk of downgrades. Citing an unnamed insider, Welt am Sonntag said VW's planned investment budget of 100 billion euros through to 2018 was under review for cuts. VW declined to comment. Sources close to the board told Reuters this week the supervisory board was looking at ways to make savings to try to avoid a downgrade in the company's credit ratings, which would lead to higher borrowing costs. They said, however, it was not talking about asset sales, after calls from some analysts for the firm to sell its trucks business or brands such as Bugatti, Ducati and Lamborghini. VW has said it will refit up to 11 million diesel vehicles that contain software capable of cheating emission tests. It also faces potential fines from regulators and prosecutors, lawsuits from consumers and investors, and a possible hit to sales from the damage to its reputation. A survey by German market research firm Puls showed 41 percent of consumers see the brand as damaged for the long term, while 11 percent say they no longer want to buy a VW, the Frankfurter Allgemeine Sonntagszeitung paper reported. -Reuters