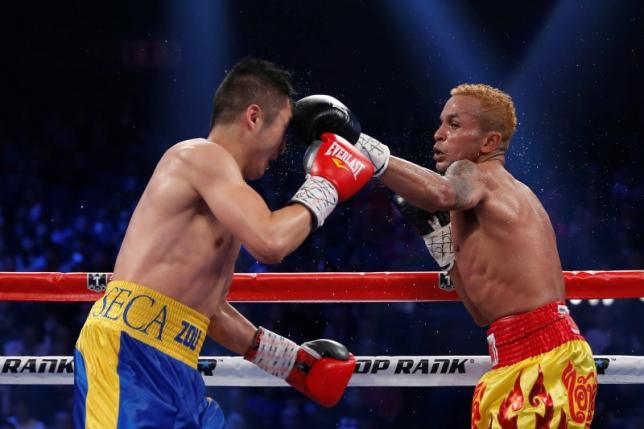 LONDON - Professional boxers will join amateurs in the ring for the first time in Olympic history in Rio but anyone hoping for box-office big-hitters can think again, even with Muhammad Ali in the draw. The Ali in question is a 20-year-old British amateur flyweight hoping to stand out for more than just a famous namesake. The professionals, whose arrival ends 112 years of amateur exclusivity but continues the sport's long tradition of controversy, will be harder to spot. Despite all the headlines and hoopla, only three outright pros have qualified among the 250 men and none run any risk of being stopped by autograph hunters in the casinos of Las Vegas or streets of New York. Step forward Italy's Carmine Tommasone, Cameroon's ex-WBO interim middleweight champion Hassan N'Dam N'jikam and Thailand's 36-year-old former IBF flyweight champion Amnat Ruenroeng as Olympic trailblazers. Other changes are more evident: no headguards for the men for the first time since 1980, which could see more fights stopped on cuts, and a new pro-style 10-point scoring system. The women, who made their Olympic debut in 2012, will keep the headguards and should see more of the limelight. All three champions -- Claressa Shields of the United States, Britain's Nicola Adams and Ireland's Katie Taylor -- are back to defend their titles among 36 women competing. Middleweight Shields, from Flint, Michigan, leads a US team of two women and just six men -- the nation's smallest male squad since 1908 -- with no heavyweights among them. Featured in a 2015 documentary, and also set to be the subject of a movie, Shields looks a strong favourite to become the first US boxer to win back-to-back golds. The men, who failed to win a medal in London, have 19-year-old New Jersey bantamweight Shakur Stevenson as a big hope this time. Flyweight Adams, now a world champion, leads Britain's biggest team in 32 years and hopes to become the country's first back-to-back boxing gold medallist since Harry Mullin in 1920 and 1924. Cuba, which does not allow women to box competitively, has 10 men entered. Robeisy Ramirez, the 2012 flyweight champion, was the last of them to qualify after moving up to bantamweight. Three times world champion Lazaro Alvarez, a bronze medallist in 2012, will be another top contender in the lightweight division. And then there is Britain's Ali, born in the year his namesake, the heavyweight world champion and 1960 Olympic gold medallist who died last June, lit the flame at the 1996 Atlanta Games. "I have just got to go out and perform and show them that I am half decent," Ali told the Yorkshire Post in February. "Hopefully I can be half as good as the real Ali one day." -Reuters