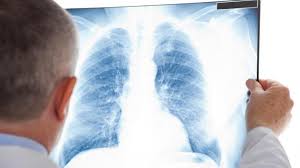 COPENHAGEN - Merck & Co scored a double hit on Sunday with new clinical data showing its Keytruda immunotherapy offered big benefits in previously untreated lung cancer patients, either when given on its own or with chemotherapy. As a monotherapy, Keytruda halved the risk of disease progression and cut overall deaths by 40 percent compared to chemotherapy alone in pre-selected patients whose tumors had been tested using a biomarker. And when given with two older chemotherapy drugs in non-selected patients, it was almost twice as likely to shrink tumors as chemotherapy alone. Another similar drug from Roche also demonstrated broad efficacy as a so-called second-line option in patients who had received prior treatment. "Remember this day. It's a new day for lung cancer treatment," Stefan Zimmermann of Lausanne's University Hospital told reporters at the European Society for Medical Oncology (ESMO) congress as the results were presented. An editorial in the New England Journal of Medicine, where the Merck monotherapy results were published, said Keytruda could become "a new standard of care". The various findings suggest that treating lung cancer - the biggest cancer killer globally - with powerful new immune system-boosting medicines is going to involve more permutations than some experts originally expected. Rival drugmaker Bristol-Myers Squibb had tried a catch-all approach with its Opdivo drug but it failed to help previously untreated patients when given on its own in a trial that included people with low levels of a protein called PD-L1. Keytruda, as a sole agent, was targeted only at patients with high PD-L1, making them more receptive to immunotherapy. Lead researcher Martin Reck of Germany's Lung Clinic Grosshansdorf predicted that testing for the PD-L1 biomarker would now become standard "from today". US regulators are expected to decide whether to approve Keytruda for first-line non-small cell lung cancer, the most common type, by Dec. 24. Merck had already said in June that Keytruda worked in the trial but the scale of the benefit was only disclosed at ESMO. COMBINATION THERAPY The second trial, mixing Keytruda with chemotherapy, was much smaller but was notable because it was the first time that a combination of immunotherapy and chemotherapy has been shown to work in a randomized Phase II study. Many experts have been skeptical about this approach and investors' expectations, up until now, have been quite low. In the event, researchers reported that Merck's combination cut the risk of disease progression or death by 47 percent compared to chemotherapy alone after 10.6 months, while 55 percent of patients saw their tumors shrink versus 29 percent. Patients in this trial were not selected by PD-L1 expression but the study did find that those with higher PD-L1 had a higher response. Roger Perlmutter, Merck's head of research, said both trials suggested Keytruda could offer a broad array of patients meaningful improvement over standard platinum-based chemotherapy, which is now more than two decades old. Drugs like Keytruda and Opdivo work by taking the brakes off the immune system and allowing the body's natural killer cells to home in on tumors. They are expected to sell tens of billions of dollars in the years ahead, with lung cancer the largest market. Up until now, Bristol has dominated the field but investors have started to shift their bets, with forecasts for Opdivo declining while those for Keytruda have risen. The current consensus forecast among analysts is for Keytruda sales to reach $8 billion in 2021, with Opdivo selling $10.5 billion, according to Thomson Reuters data. Results of Bristol's failed Opdivo trial, which included patients with tumors testing only 5 percent or higher for PD-L1 against the 50 percent cut-off used by Merck, were also presented at ESMO. These showed progression-free survival was 4.2 months with Opdivo and 5.9 months with chemotherapy, although the difference was not statistically significant. Overall survival was 14.4 months with Opdivo versus 13.2 months. The failure of Opdivo to work for "all comers" in lung cancer was first announced in August, without any details. It was a major setback for Bristol, wiping out around a quarter of the company's market value, and it has caused investors to rethink prospects for immunotherapy treatments. Many now believe that combination therapy is the way ahead, with Bristol and AstraZeneca working primarily on using two immunotherapies together, while Roche and Merck look at adding chemotherapy. -Reuters