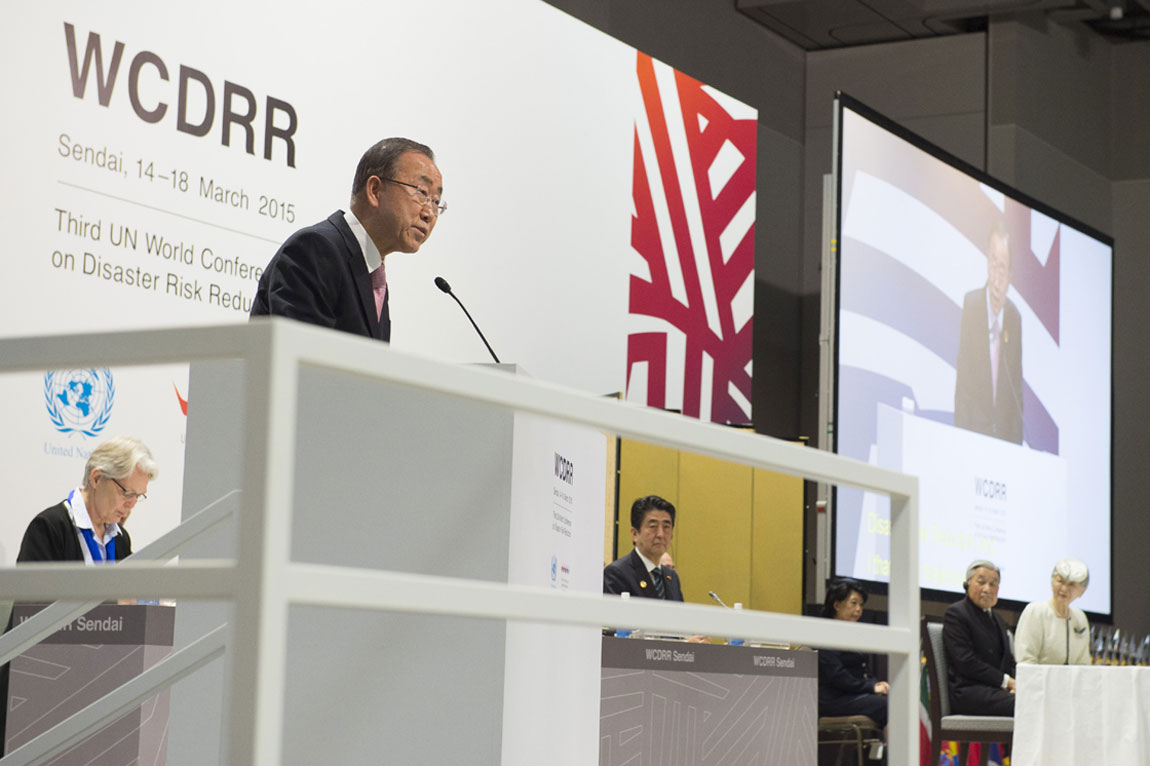 SENDAI, JAPAN - Governments at a UN conference in Japan set targets to substantially reduce deaths and economic losses from disasters late Wednesday, in the first of three major global agreements to advance development and tackle climate change this year. After a marathon negotiating session that ended just before midnight, the talks adopted the Sendai Framework for Disaster Risk Reduction, a 15-year plan that will replace the current 10-year blueprint. "This new framework... opens a major new chapter in sustainable development as it outlines clear targets and priorities for action which will lead to a substantial reduction of disaster risk and losses in lives, livelihoods and health," said Margareta Wahlström, head of the UN Office for Disaster Risk Reduction (UNISDR). Implementation "will be vital to the achievement of future agreements on sustainable development goals and climate later this year", she added. Experts described the inclusion in the agreement of seven targets to measure progress on protecting people and assets as a leap forward. But some were disappointed that earlier proposals for percentage goals were rejected. Instead the draft text includes aims to lower the global mortality rate from disasters between 2020 and 2030, compared to 2005 to 2015, and reduce the proportion of people affected.

Another target is to reduce economic losses in relation to global GDP by 2030. In the decade covered by the expiring Hyogo Framework for Action, more than 700,000 people lost their lives, and over 1.5 billion people were affected by disasters. Total economic losses topped $1.3 trillion. The new, non-binding agreement also includes targets to reduce damage to infrastructure and disruption to basic services, including health and education facilities, and to increase access to early warning systems and disaster risk information for the public. But some disaster experts said a lack of a firm commitments in the agreement to ramp up international aid for risk reduction would undermine poorer countries' efforts to make progress on the goals. Only Japan put money on the table in Sendai, promising to provide $4 billion in support over the next four years. "Rich nations have pushed making financial commitments to reduce disaster risk to a separate round of financing negotiations later in the year," said Farah Kabir, country director of ActionAid Bangladesh, referring to a conference in Ethiopia in July. Without larger financial commitments, "the results for vulnerable communities in poor countries will be catastrophic," he added. The devastation caused by Cyclone Pam in the South Pacific island nation of Vanuatu at the start of the conference last week highlighted the need for greater efforts to protect those most at risk from extreme weather and other hazards. "Disasters, many of which are exacerbated by climate change and (are) increasing in frequency and intensity, significantly impede progress towards sustainable development," the Sendai framework said. "It is urgent and critical to anticipate, plan for and reduce disaster risk in order to more effectively protect persons, communities and countries... and thus strengthen their resilience," it added. Maggie Ibrahim, World Vision UK's resilience manager, said the Sendai conference had spotlighted issues affecting the disabled, women and children in disasters. But the agreement would not equip them and other vulnerable people with the resources and tools to build skills so they can better prepare for disasters and avert crises, she said. "This new plan in its current text and form has only become weaker with every subsequent draft,” she said. - Reuters