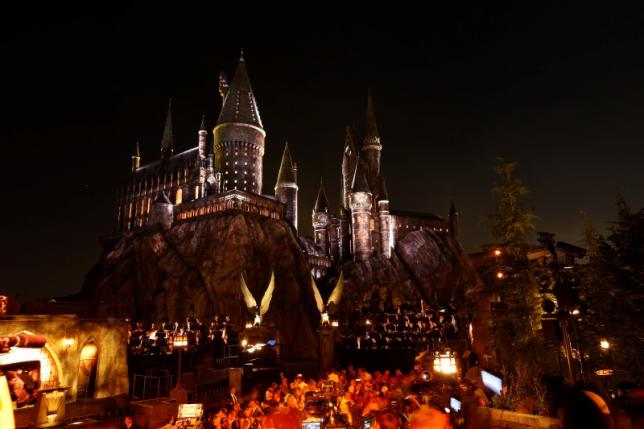 LOS ANGELES - Dressed in Hogwarts robes and waving wands, eager fans got a first glimpse of the next installment in the Harry Potter saga, giving a new London stage production glowing reviews. "Harry Potter and the Cursed Child" brings back to life author J.K. Rowling's magical world of wizards and witches, set 19 years after her last book about the much-loved character and his friends Ron and Hermione. The play, the eighth story in the series, opened for previews on Tuesday night at London's Palace Theater, outside which queues snaked for meters as those who secured the first tickets waited anxiously to get in. The play, split into two parts, follows the three friends into adulthood, with Potter now described as an overworked Ministry of Magic employee, coping with his youngest son Albus' struggles with his famous family's legacy. Little else has been revealed and Rowling, whose books were turned into box office hit movies, has asked that audiences do not spoil the story for others. "I really liked the films but after seeing this, I would say, forget the films," fan Callum Fawcett said. "This is fantastic ... It's got everything." "It was utterly remarkable, just incredible," fellow fan Ollie Southgate added. "It's a whole different version of everything that everyone loves about the books ... The visual effects they've got is like nothing I've ever seen." The play is based on a story written by Rowling, screenwriter and playwright Jack Thorne and director John Tiffany. Journalists said audiences were enchanted. "The audience ... cannot be more thrilled or more appreciative or more ready to be caught up in the spirit of the undertaking," wrote the New York Times adding: "The three main characters remained true to their younger selves". Britain's Daily Telegraph wrote: "The audience came wanting magic and they got it in spades ... Has Rowling done it again? The audience was in no doubt." On Twitter, Rowling said the reaction to the first preview was "wonderful". "Harry Potter and the Cursed Child" opens on July 30. -Reuters