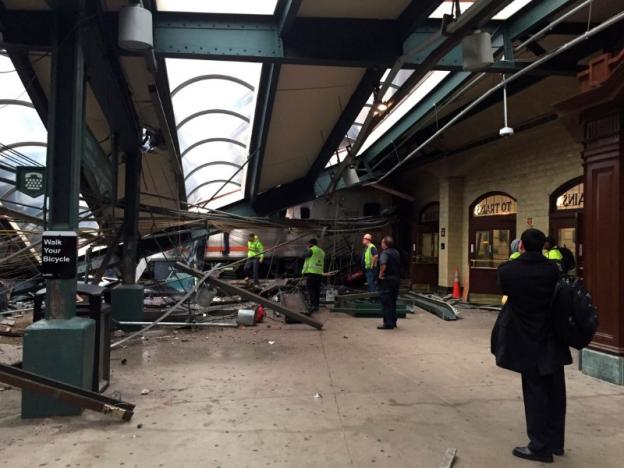 HOBOKEN, New Jersey – Three people were killed and more than 100 injured, some critically, when a commuter train derailed and ploughed through Hoboken station in New Jersey during the morning rush hour on Thursday, U.S. media and a transit official said.
Citing medical officials, U.S. media reports said three people were killed. Well over 100 people were hurt, many of them critically, Jennifer Nelson, a spokeswoman for train operator New Jersey Transit, told reporters at the scene. She did not confirm any fatalities. Dramatic pictures posted by commuters showed a train carriage that appeared to have smashed right through the station concourse, collapsing a section of the roof, scattering debris and wreckage and causing devastation. ABC News said on its website that New Jersey Transit was reporting many passengers were trapped. Fox News said the engineer, or train driver, had to be extricated from the front car. Hoboken lies on the west bank of the Hudson River across from New York City. Its station, one of the busiest in the metropolitan area, is used by many commuters travelling into Manhattan from New Jersey and further afield. There was no word yet on what caused the crash. Federal investigators were en route to the scene. Linda Albelli, 62, said she was sitting in her seat in one of the rear cars when the train approached the station. She said she knew something was wrong a moment before the impact. "I thought to myself, 'Oh my god, he's not slowing up, and this is where we're usually stop,'" Albelli said. "'We're going too fast,' and with that there was this tremendous crash." –Reuters