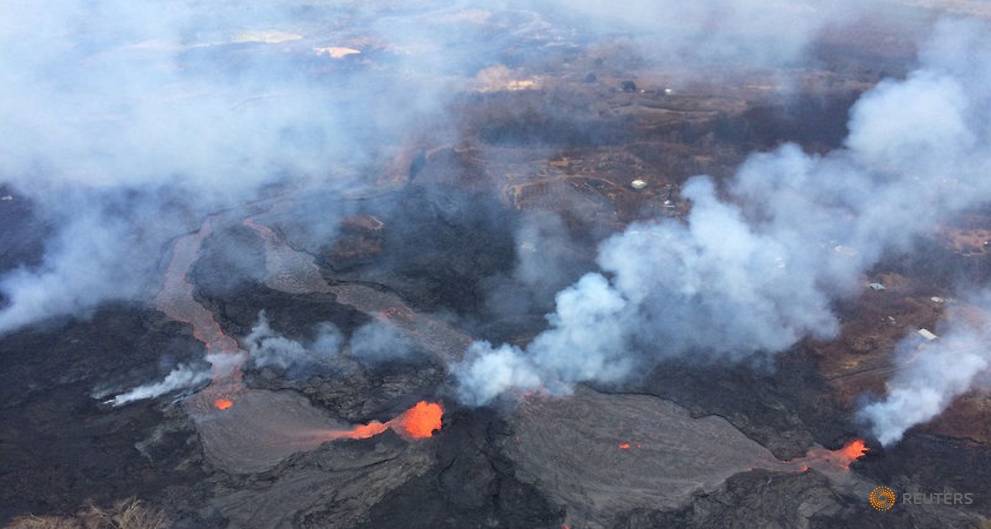 HONOLULU (Reuters) - A broad lava flow cascaded toward a Hawaii geothermal power station , posing a new hazard as molten rock from the erupting Kilauea volcano bulldozed relentlessly through homes and backyards. The lava was less than half a mile from the Puna Geothermal Venture (PGV), according to the US Geological Survey, having destroyed dozens of nearby houses in the past few days. Since Hawaii’s Kilauea volcano began a once-in-a-century-scale eruption May 3, authorities have shutdown the plant, removed 60,000 gallons of flammable liquid and deactivated wells that tap into steam and gas deep in the Earth’s core. Magma has drained from Kilauea’s summit lava lake and flowed around 25 miles (40 km) east underground, bursting out of about two dozen giant cracks or fissures near the plant. “The flow from fissures 21 and 7 was widening and advancing,” Janet Snyder, a spokeswoman for the County of Hawaii, said in an email on the position of lava heading northeast toward PGV at 12:30 p.m. (6:00 p.m. ET) Hawaii Governor David Ige has said the wells are stable. But lava has never engulfed a geothermal plant anywhere in the world and the potential threat is untested, according to the head of the state’s emergency management agency. Local residents fear an explosive emission of deadly hydrogen sulfide and other gases should wells be ruptured. “I don’t have any estimate on how long it will take to get there,” said US Geological Survey geologist Wendy Stovall on a conference call, on the flow moving toward PGV at about 50 feet (15 meters) per hour.

270 EARTHQUAKES IN ONE DAY

Residents have complained of health hazards from emissions from the plant since it went online in 1989 and PGV has been the target of lawsuits challenging its location on the flank of one of the world’s most active volcanoes. The Israeli-owned 38 megawatt plant typically provides around 25 percent of electricity on the Big Island, according to local power utility Hawaii Electric Light. Operator Ormat Technologies Inc  last week said there was no above-ground damage to the plant but it would have to wait until the situation stabilized to assess the impact of earthquakes and subterranean lava flows on the wells. In just the past 24 hours there were between 250 and 270 earthquakes at Kilauea’s summit, with four explosions sending ash to altitudes as high as 12,000-15,000 feet, said Stovall and National Weather Service meteorologist John Bravender. Winds are set to shift on Monday and Tuesday, causing higher concentrations of ash and volcanic smog that will spread west and northwest to affect more populated areas, Bravender said. US Marine Corp and National Guard helicopters are on standby for an air evacuation in the event fissure activity cuts off Highway 130, the last exit route for up to 1,000 coastal residents. Cracks in the highway have yet to emit hydrogen sulfide gas which would indicate magma was rising toward the surface, Stovall said.