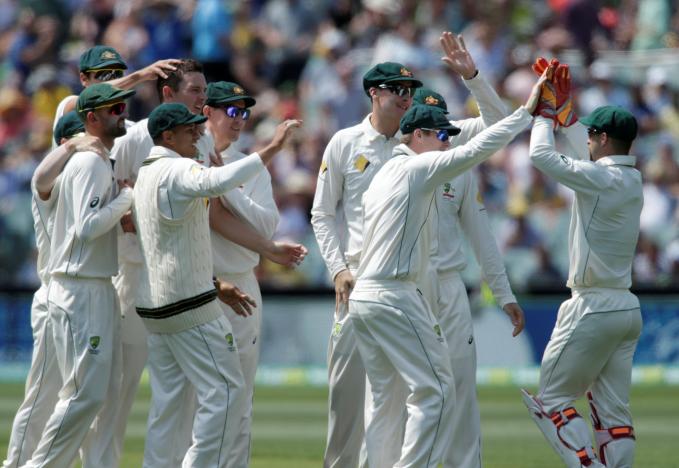 ADELAIDE - Josh Hazlewood took 4-36 as Australia's pace attack ripped through South Africa's batting order to reduce the tourists to 165 for seven at dinner on the opening day of the day-night third test on Thursday. Proteas captain Faf du Plessis hit back with a defiant half century but Australia, with three new caps in their team, made a promising start to a match they must not lose to avoid a first ever 3-0 series sweep on home soil. Hazlewood did the most damage but Mitchell Starc pitched in with two wickets and the recalled Jackson Bird claimed his 22nd test victim. Du Plessis, leading the Proteas despite being found guilty of ball-tampering on Tuesday, was booed by sections of the crowd when he came out to bat but reached the second break of the day unbeaten on 65. Kyle Abbott will resume alongside him on one not out when the South Africans embark their first ever night session in test cricket. All seven wickets fell to catches behind the wickets as the Australian quicks bowled disciplined lines and got some movement with the pink ball off the Adelaide Oval track. Australia completely overhauled their team after their humiliating innings and 80-run loss in the second test in Hobart, their fifth straight defeat. If captain Steve Smith was hoping the new era of Australian cricket would end his run of five matches without winning the toss he was to be disappointed, however. Du Plessis sent his openers in to face Australia's pace attack, the one area of the home team that has not embarrassed itself in humiliating defeats in the first two tests. Dean Elgar, Hashim Amla and JP Duminy were all despatched for five runs apiece after opener Stephen Cook had earned a reprieve when Starc trapped him lbw only for the TV replay to show the left-armer had overstepped the mark. Cook was unable to add to his series-best tally of 40 after the first break before edging Starc to Smith in the cordon and when Temba Bavuma (8) got an outside edge to a Bird delivery, the tourists were 117-5. Quinton de Kock and his captain put on 32 for the sixth wicket in what looked like being a dangerous partnership but Hazlewood served up another peach of a delivery to send the wicketkeeper back for 24. Vernon Philander (4) faced only nine balls before he became Hazlewood's fourth victim, a TV review showing the slightest of inside edges to an inswinger. -Reuters