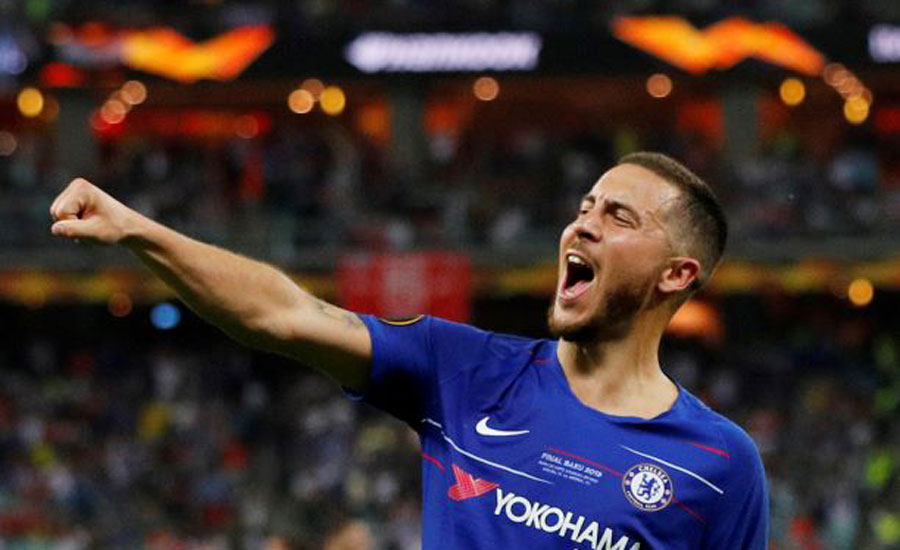 MADRID (Reuters) - After five years without a ‘Galactico’ signing, Real Madrid have recruited Eden Hazard to return the dishevelled Spaniards to their perch as the best side in Europe, while the Belgian hopes his new team can elevate him to a higher level too. The 28-year-old agreed a five-year deal with Real on Friday in a reported 100 million euros (£89 million) transfer from Chelsea, making him the club’s joint-record signing with Gareth Bale, who joined from Tottenham Hotspur in 2013. He is also Madrid’s first marquee signing since forward James Rodriguez moved to the Bernabeu for 80 million euros after finishing as top scorer at the 2014 World Cup. But while the Colombian arrived at the then newly crowned Champions League winners, Hazard is joining a Real side in disarray after they ended the season without a trophy and having finished 19 points adrift of La Liga champions Barcelona. Even though Madrid have craved Hazard for years, the Belgian’s arrival is just one step in a huge rebuilding process being overseen by coach Zinedine Zidane, who has already signed Serbian striker Luka Jovic and Brazilian defender Eder Militao. Zidane is a known admirer of the former Lille winger and will hope Hazard’s silky play and dynamic dribbling can add excitement to Madrid’s attack and boost their waning goal threat since all-time top scorer Cristiano Ronaldo left last year. Madrid have struggled for goals since Ronaldo’s departure for Juventus, as Welshman Bale and Marco Asensio failed to successfully step up, and Hazard has come to fill that void, poised to operate from the left flank with licence to roam. The Belgium forward’s goalscoring tallies for Chelsea have been erratic over the past few years but under the London club’s Italian coach Maurizio Sarri this season he has been lethal. Hazard scored 16 Premier League goals and provided 15 assists as Chelsea finished third in the standings, then providing a fitting swansong with two goals and an assist in the 4-1 win over Arsenal in the Europa League final.

With Chelsea having fallen way behind Manchester City and Liverpool in the Premier League, Hazard leaves Stamford Bridge hungry to compete again for the top honours in the game, particularly the Champions League which he has never won. Despite Madrid’s awful last campaign, he could hardly be joining a team better versed in landing Europe’s elite competition, which they have won a record 13 times. “He’s in the top few players in the world,” Hazard’s former Chelsea team mate Frank Lampard told talkSPORT radio last month. “Of course it will be disappointing to lose him for the Premier League, but particularly Chelsea. You don’t replace Eden Hazard, you have to find ways around it.” Hazard’s ability to ghost past defenders and link up with team mates should see him forge a great partnership with Real striker Karim Benzema, who has enjoyed one of his best seasons despite the Madrid side’s collective failures. Benzema spent years toiling on behalf of Ronaldo, but Hazard scores and creates in equal measure and the French forward will enjoy collaborating with Madrid’s new hope. At Chelsea it seems Hazard often had to do it all himself, but if Zidane’s rebuild is successful the highly talented forward will have plenty of support at the Santiago Bernabeu.