KHARTOUM - Military and civilian members of Sudan's newly formed ruling body have been sworn in at the presidential palace in the country's capital, Khartoum.

The sovereign council, comprising of six civilians and five soldiers, is to rule Sudan for a little over three years until elections can be held. It replaces the Transitional Military Council (TMC) that took power in April after longtime ruler Omar al-Bashir was forced out of office following months of mass protests against his nearly three-decade rule.

The council's inauguration on Wednesday comes days after the TMC and the Forces of Freedom and Change (FFC), an alliance of protest groups and opposition parties, signed a final power-sharing deal.

General Abdul Fattah al-Burhan, who also headed the TMC, was sworn in as the council's chairman on Wednesday morning, according to the state-run SUNA news agency. He will lead the council for 21 months, after which a civilian leader appointed by the protest movement will take over for the next 18 months. Al-Burhan, 59, wore a green beret and a camouflage uniform as he took his oath before Sudan's top judge, one hand on the Quran and the other holding a military baton under his arm. Nine other members of the council took their oath of office shortly afterwards. The 11th member, a civilian, will be sworn in at a later date, SUNA said. "With the start of the transition period, we have entered the most complex phase, the phase of building and reform," said a spokesman for the Sudanese Professionals Association, a key part of the FFC.

In addition to al-Burhan, the soldiers on the council are General Mohamed Hamdan Dagalo, the TMC's deputy head widely known as Hemeti, as well as Yasser Abdul Rahman al-Atta, Ibrahim Jabir and Shams al-Din Kabashi. The six civilians include two women - Ayesha Musa Saeed and Raja Nicola Issa Abdul-Masseh, who is a judge from Sudan's Coptic Christian minority. The others are Hassan Sheikh Idris Qadi, Al-Siddiq Tawer Kafi, Mohammed al-Fekki Suleiman and Mohamed Osman Hassan al-Taayeshi. The latter is yet to take his oath. The sovereign council will oversee the formation of a government and a 300-member legislative body. Abdalla Hamdok, who was chosen by the protest movement to be prime minister, will take the oath of office later on Wednesday. Following his appointment, he will have 21 days to name a 20-member cabinet, excluding the interior and defence ministers. The pair will be chosen by the soldiers on the sovereign council. Al Jazeera's Hiba Morgan, reporting from Khartoum, said the Sudanese people's "next focus is going to be on the executive council, which will have a majority from the Forces of Freedom and Change. That's where most of the power will lie because the sovereign council will have a largely ceremonial role". In Khartoum, Ramzi al-Taqi, a fruit seller, vowed to keep Sudan's new rulers in check. "If this council does not meet our aspirations and cannot serve our interests, we will never hesitate to have another revolution," he told AFP news agency. "We would topple the council just like we did the former regime."

The military overthrew al-Bashir in April following months of widespread demonstrations against his authoritarian rule. The protests initially erupted in December last year over dire economic conditions but shortly turned to calls for al-Bashir's removal. Protesters continued taking to the streets after al-Bashir's toppling on April 11, fearing the military could cling to power, and demanded a swift transition to a civilian government. 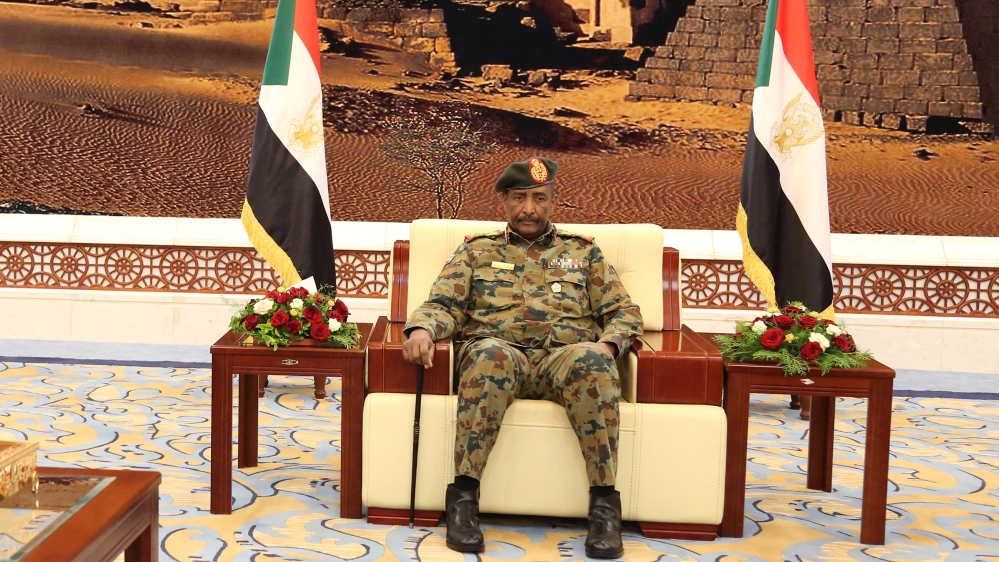 General Abdel Fattah al-Burhan is the head of Sudan's ruling Sovereign Council [Sudan Presidential Palace/ AFP]
The tortuous negotiations over the joint military and civilian council continued despite a deadly security crackdown on a protest sit-in in the capital Khartoum, which protesters blamed on the feared paramilitary Rapid Support Forces, headed by Hemeti. At least 250 people have been killed since December, according to protest organisers. Luka Kuol, professor at the Africa Center for Strategic Studies in the United States, described the swearing in of the sovereign council as a "big victory" for the Sudanese people. There were many challenges ahead, he said. "You have about 30 years of misrule by the regime of al-Bashir. It will take a long time for you to clean the system in order to deliver. You are likely to have a very high expectations of the citizens ... [but] the capacity for you to deliver will be limited because its the old system is stil there. Managing the people's expectations will be one of the real challenges of this government." A second issue was the "politicised security sector," he said. "The defence and interior ministers are to be appointed by the military. This is a sign that the security sector is being carved out from the civilian administration, and this is a sector that consumes no less than 60 percent of the government budget," he said, urging the new civilian government to come up with an agenda to reform the security forces. Other challenges ahead included tackling the economic crisis that triggered the protests against al-Bashir and the ongoing conflicts in the regions of Darfur, Kordofan and Blue Nile. "Although there are a lot of challenges ahead, there are a lot of opportunities for the people of Sudan to make a difference and map a new road for stability," he added.
SOURCE: AL JAZEERA AND NEWS AGENCIES