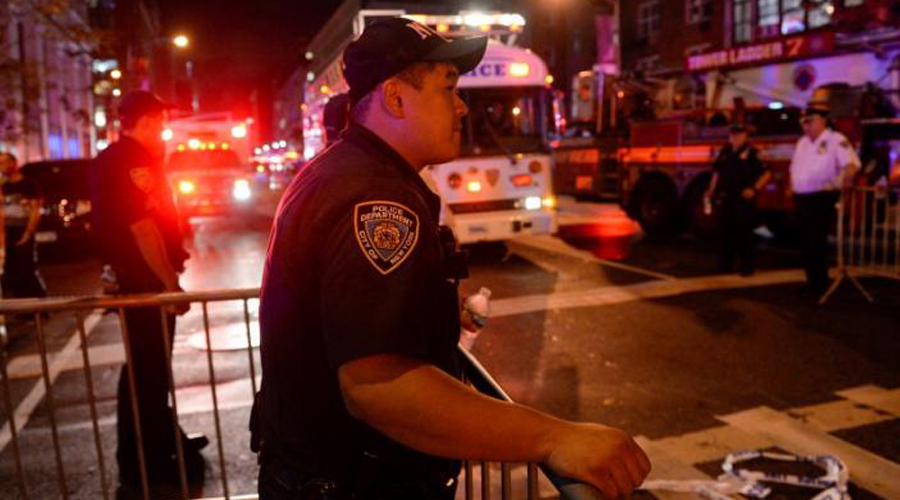 NEW YORK - An explosion rocked the bustling Chelsea district of Manhattan on Saturday night, injuring at least 29 people in what authorities described as a deliberate, criminal act, while saying investigators had turned up no evidence of a "terror connection." New York City Mayor Bill de Blasio and other city officials said investigators had ruled out a gas leak as the cause of the blast, but they stopped short of calling it a bombing and declined to specify precisely what they believed may have triggered the explosion. Neha Jain, 24, who lives in the neighbourhood, said she was sitting at home watching a movie when she heard a huge boom and everything shook. "Pictures on my wall fell, the window curtain came flying as if there was a big gush of wind," she told Reuters. "Then we could smell smoke. We went downstairs to see what happened, and firemen immediately told us to go back." Police said a sweep of the neighbourhood following the blast had turned up a possible "secondary device" four blocks away consisting of a pressure cooker with wires attached to it and connected to a cell phone. CNN, citing law enforcement sources, reported that a piece of paper with writing on it was found nearby. Residents living nearby were advised to stay away from windows facing the street as a precaution, and the item was later safely moved to a police firing range for further examination, officer Christopher Pisano said. Pressure cookers packed with explosives and detonated with timing devices were used by two Massachusetts brothers in the 2013 Boston Marathon bombing that killed three people and wounded more than 260. The latest blast came less than a week after law enforcement agencies around the country were on heightened alert for the 15th anniversary of the Sept. 11, 2001, airline-hijacking attacks that killed nearly 3,000 Americans in New York, Washington and Pennsylvania. Remaining circumspect about the exact nature of the explosion in Chelsea, De Blasio said early indications were that it was "an intentional act." He added that the site of the blast, outside on a major thoroughfare in the fashionable lower West Side Manhattan neighbourhood, was being treated as a crime scene. "There is no evidence at this point of a terror connection," the mayor said at a news conference about three hours after the blast. "There is no specific and credible threat against New York City at this point in time from any terror organisation." The mayor also said investigators did not believe there was any link to a pipe bomb that exploded earlier on Saturday in the New Jersey beach town of Seaside Park. No injuries were reported in that blast, from a device planted in a plastic trash can along the route of a charity foot race. But a U.S. official said that a Joint Terrorism Task Force, an interagency group of federal, state and local officials, was called to investigate the Chelsea blast, suggesting authorities have not ruled out the possibility of a terror connection. A joint task force also took the lead in investigating the New Jersey incident. ONE PERSON SERIOUSLY INJURED A law enforcement official told Reuters an initial investigation suggested the Chelsea explosion occurred in a dumpster. CNN cited law enforcement sources as saying they believed an improvised explosive device caused the blast. President Barack Obama, attending a congressional dinner in Washington, "has been apprised of the explosion in New York City, the cause of which remains under investigation," a White House official said. New York City Fire Commissioner Daniel Nigro said 29 people were hurt in the blast, and 24 of them had been taken to hospitals, including one he described as seriously injured. The rest suffered various cuts, scrapes and other minor injuries, Nigro said. The explosion, described by one neighbour as "deafening," happened outside the Associated Blind Housing facility at 135 W. 23rd Street. The facility provides housing, training and other services for the blind. Hundreds of people were seen fleeing down the block as police rushed to cordon off the area. Tsi Tsi Mallett, who was driving along 23rd Street when the explosion took place, told Reuters the blast blew out her vehicle's rear window. Her 10-year-old son in the back seat was unhurt, she said. "It was really loud, it hurt my eardrums," she said. Even before the explosion, New York was tightening security for the start of this week's U.N. General Assembly session, which is expected to bring 135 world leaders and dozens of foreign government ministers to the city. The explosion quickly became an issue in the presidential race, with Republican candidate Donald Trump remarking about the explosion when he appeared at a Colorado rally. "Just before I got off the plane, a bomb went off in New York, and nobody knows exactly what’s going on," Trump said a hours before New York officials spoke publicly about the blast. "We better get very tough, folks." Democratic rival Hillary Clinton made a statement on her campaign plane on the ground in New York, saying she had been briefed on "the bombings in New York and New Jersey." But she said she would wait until she had more information before commenting further. -Reuters