New York train was not speeding before crash with car 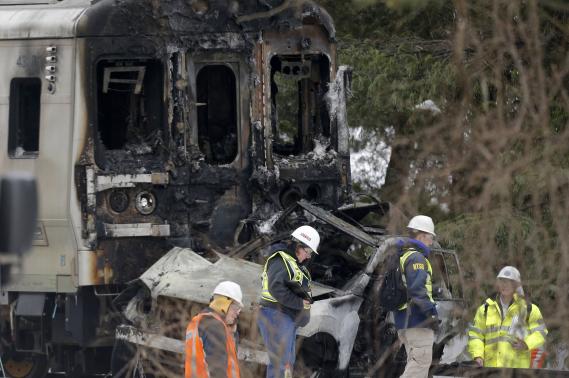 New York train was not speeding before crash with car

(Reuters) - The New York commuter train that plowed into a car stopped on a crossing this week was traveling just below the speed limit and no problem was found with the signals or traffic barriers at the site of the deadly crash, a federal investigator said on Thursday. But preliminary data released after the first full day of the National Transportation Safety Board's investigation did not clear up the central mystery of the fatal accident: why did a Mercedes sports utility vehicle end up on the wrong side of the crossing barrier as the Metro-North train approached? The fiery crash that followed killed the SUV driver and five train passengers in the deadliest rail accident in the New York area in more than three decades. It was the latest in a string of accidents to unnerve commuters on the country's second-largest commuter railroad. The driver of the vehicle behind the Mercedes told NTSB investigators on Thursday that traffic was "edging along" at the railway crossing in Valhalla, an affluent town north of New York City, Robert Sumwalt, an NTSB member, said at a news conference. The Mercedes came to a stop on the crossing, Sumwalt said. The barrier descended on its rear window. The crossing warning lights began flashing and sirens started to ring out, and the driver behind her described reversing to make room for her to retreat, gesturing with his hands, Sumwalt said. Instead, he watched as Ellen Brody, a 49-year-old mother of three who worked in a local jewelry shop, got out of the Mercedes and inspected the barrier without moving it before getting back into the driver's seat. "Then she sat in the vehicle," Sumwalt said. "He described it as if she had enough time to put on her seatbelt." Investigators also interviewed the engineer on Thursday who was driving the crowded rush-hour train. He told them that he spotted the Mercedes ahead of him, Sumwalt said. Data from a train recording device showed it was traveling at 58 miles per hour, just below the speed limit of 60 miles per hour, and had sounded its horn in the usual way as it approached the crossing: two long blasts, a short one, two more long ones. The engineer deployed the train's emergency brake, and the train's horn blew again for four seconds. Meanwhile, the driver behind the Mercedes watched as Brody "suddenly pulled forward," Sumwalt said. "As she did so, the train struck the car," Sumwalt said. The train, pushing the Mercedes down the track, took nearly 30 seconds and 950 feet before coming to a stop after the emergency brake was activated, Sumwalt. Long pieces of electrified "third" rail skewered the Mercedes and pierced the first two train carriages as a gasoline-fueled fire erupted. Passengers riding the train's rear remained oblivious to the carnage unfolding ahead of them. Sumwalt said his team were seeking Brody's records and trying to figure out how familiar she was with the route and her Mercedes. On Thursday, people commuting to work on Metro-North said the crash made them think more about safety. "Did I think deep down whether I should be sitting in the first car? I thought about it," said Alan Trager, 65, chief executive officer of a non-profit agency, as he rode the same train line out of Grand Central Terminal. "I go, 'Oh, I should have paid attention to the emergency windows,'" he said as he sat in the second carriage of the train. "It's enhanced my consciousness of that." About 250 people a year are killed in vehicle-train collisions at U.S. crossings, according to the Federal Railroad Administration.