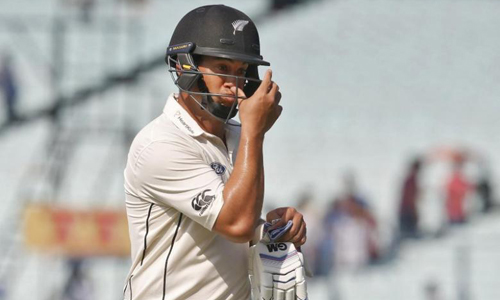 CHRISTCHURCH- New Zealand batsman Ross Taylor is to see an eye specialist before the second test against Pakistan, coach Mike Hesson told reporters on Sunday. The 32-year-old did not bat in the second innings of New Zealand's eight-wicket victory over Pakistan at Hagley Oval in Christchurch, with Henry Nicholls instead taking his place at the crease in the number four spot. Hesson said the problem with Taylor's vision out of his left eye had been evident for about a year, but it was treatable. He had an initial exam on the first day of the test on Thursday. "He's (Taylor) seeing him tomorrow (Monday)," Hesson told reporters. "It appears to have deteriorated a little bit. "Ross had his (regular check) six months ago and there were no issues at all. So it might have come a little quicker than we'd like." A decision on whether Taylor would be available for the second test starting in Hamilton on Nov. 25 would be made after Monday's examination, Hesson said. Nicholls had little to do, however, with just one run needed when he strode to the wicket, after captain Kane Williamson had guided them to the brink of victory with a brisk 61. Opening batsman Jeet Raval then struck a four to end the game after lunch on day four as the hosts reached 108 for two after being set 105 to win the game. -Reuters