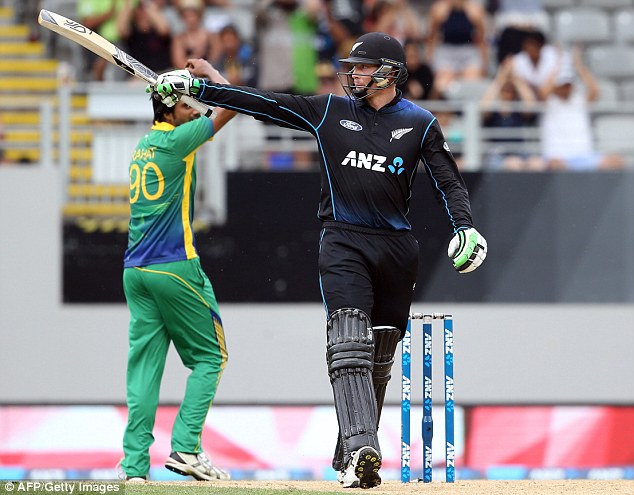 AUKLAND (92 News) – The Black Caps have beaten Pakistan by three wickets and with two balls left in the final one-dayer to win the three-match series 2-0.

Pakistan captain Azhar Ali won the toss and surprisingly elected to bat despite rain threatening, and teams normally choosing to bat second when the Duckworth Lewis system was likely to come into play. Babar Azam made 83, Mohammad Hafeez 76 and their partnership of 134 for the third wicket.

After they were separated Santner removed Hafeez at 154-3, then Matt Henry dismissed Babar Azam at 215-4 the Pakistan innings went into decline. Wicketkeeper Sarfraz Ahmed made 41 and Shoaib Malik 32 but Pakistan fell well short of the total that seemed likely when Babar and Hafeez were together.

Kiwis faced an original target of 291 in Auckland and were 5-210, needing 81 runs from 87 balls, when play was halted for an hour on Sunday. When it resumed, the equation under the Duckworth-Lewis method was 263 from 43 overs, or 53 runs from 45 deliveries.

It was an enthralling contest, with both sides laying strong platforms before suffering collapses, but the home side edged it thanks to a more composed lower order. And when Mohammad Amir - the pick of the bowlers again on an impressive comeback tour - had Brendon McCullum out with his very first ball, Pakistan looked like they might level the series.

The result gives New Zealand the series 2-0 with game two washed out.