New Zealand in command against Pakistan in Hamilton 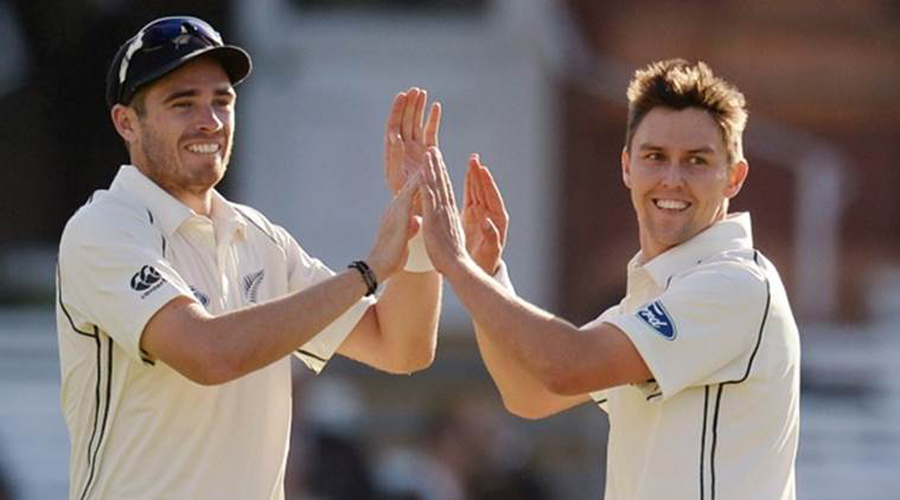 New Zealand in command against Pakistan in Hamilton

HAMILTON (92 News) - New Zealand's Tim Southee and Neil Wagner ripped the heart out of Pakistan's batting lineup to leave the visitors struggling on 76 for five at the close of the second day's play in the second test on Saturday. Babar Azam was on 34 at stumps at Seddon Park in Hamilton, while Sarfraz Ahmed was on nine with their side still 195 runs behind New Zealand's first innings total of 271. Southee blasted through the top of the Pakistani batting order with a beautiful off stump line, the ball doing just enough from the pitch to coax three edges that were held by players behind the wicket. Southee had Sami Aslam caught for five by Jeet Raval off the first ball of the fifth over, then removed Pakistan's stand-in captain Azhar Ali on the final delivery when wicketkeeper BJ Watling took a simple catch. He then had Younus Khan caught by Watling for two in the ninth over to reduce Pakistan to a desperate 12-3. Babar and Asad Shafiq set about rebuilding the innings but Wagner wrestled back the initiative with two wickets in two balls. Shafiq (23) was the first to fall when he chased a wide delivery and dragged on, before debutant Mohammad Rizwan hooked his first ball in test cricket straight to Matt Henry at deep fine leg to leave his side on 51-5. The hosts, who had resumed on 77-2 after much of the first day was washed out, were under pressure early with Pakistan's bowlers exploiting the moist pitch and overcast conditions. Ross Taylor, who had resumed on 29, advanced to 37 before he became the first wicket to fall on Saturday when he feathered a catch to wicketkeeper Sarfraz off Sohail Khan. New Zealand's batsmen then proceeded to thwart the visitors by all getting starts but when Raval, who scored his second test half century, and Henry Nicholls (19) fell before lunch, the visitors had taken a slim advantage with the hosts 177-5. Watling, however, again proved to be the glue that held the lower order together, sharing in a 51-run stand with Colin de Grandhomme (37), 33 with Mitchell Santner (16), 36 with Southee (29) and 31 with Matt Henry (15). Unfortunately the 31-year-old was unable to achieve his 13th test half century, finding himself stranded on 49 not out when Wagner was caught for one by Younus off Imran Khan to end the innings. New Zealand won the first match of the two-test series by eight wickets. Reuters