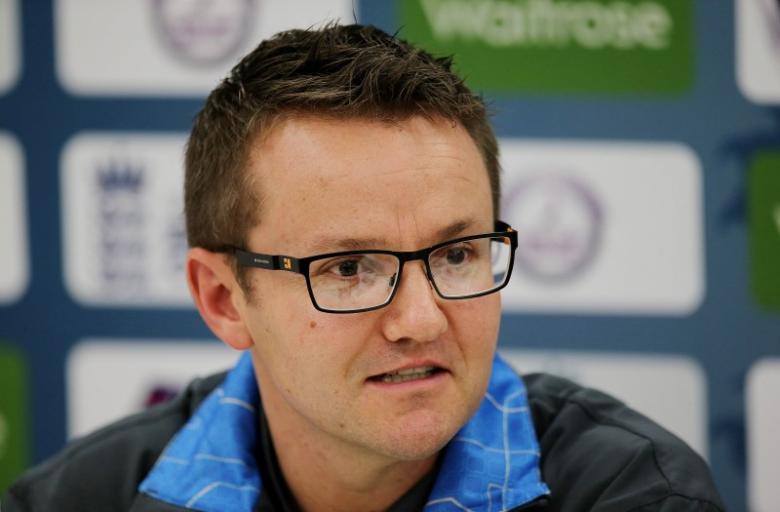 NEW DELHI - New Zealand will bank heavily on reverse swing to emerge from the trial by spin that awaits them in the test series in India, coach Mike Hesson said on Tuesday. Last time they hosted a team, India rolled out turning tracks and flexed their spin muscles to crush South Africa 3-0 in the four-test series last year. Kane Williamson and his men can look forward to a similar treatment in the three-test series beginning in Kanpur on Sept. 22 but Hesson sounded upbeat. "It's a huge component of playing cricket overseas," the bespectacled coach told reporters. "On surfaces that aren't responsive in terms of seam movement, and they are abrasive and they lose their shine very quickly, you need to find another way. "Hence overseas teams are pretty keen to find ways to get the ball to reverse, obviously in a legitimate fashion." Hesson conceded it would be a different ball game for his side, literally. "The challenge for us is firstly adjusting to the different ball," he said. "The SG balls (to be used for the series) can be different to what we have been operating with, the Kookaburra." New Zealand have picked three spinners -- Mark Craig, Mitchell Santner and Indian-born Ish Sodhi -- in their squad and Hesson said they could prove quite a handful on the turning tracks. "All three... are keen learners of the game and certainly we're going to put a lot of faith in them in the coming weeks." Captain Williamson was confident his team would prove equal to the task against the world's second-ranked test team. "It's a tough place to play, particularly in recent years," said the 26-year-old who will need to lead from the front with the bat if they are to succeed in the series. "The pitches have been very tricky and you throw in world class spinners, the challenge is very tough. "At the same time, we see it as a very exciting opportunity... You want to be playing the best in their backyard and the guys are excited and looking forward to the challenge." The series, which also includes matches in Kolkata and Indore, was to feature the first day-night test in India before the proposal was shelved. "There's no doubt that the pink-ball test was discussed," said Hesson, whose team played the first ever day-night test against Australia at Adelaide in November, 2015. "Having played one, we were obviously quite happy to play one but for some reason, it was deemed not appropriate. Certainly was not something that came from our camp." -Reuters