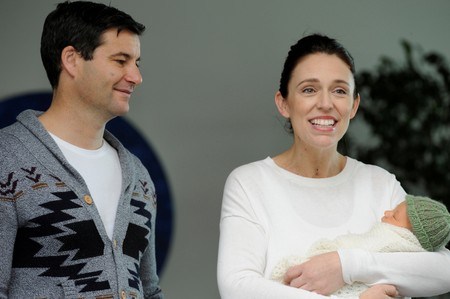 WELLINGTON (Reuters) - New Zealand Prime Minister Jacinda Ardern returned to work on Thursday just six weeks after delivering her first child, having become the first premier in the nation’s history to take maternity leave while in office.
The 38-year-old premier’s pregnancy enthralled the New Zealand public and was seen by many as a symbol of progress for women in leadership roles as she became only the second elected leader, after Pakistan’s Benazir Bhutto in 1990, to have given birth in office. New Zealand’s parliament has worked to become more baby-friendly in recent months and Ardern’s daughter, Neve Te Aroha, will be allowed to cuddle with her mother during debates and swim in the pool alongside other legislators’ children. Ardern’s stratospheric rise to become the country’s youngest prime minister and third woman to hold the office resulted in New Zealanders coining the phrase “Jacinda-mania” and her personal approval ratings have been at historic highs. She emerged as leader of the then-struggling Labour Party a year ago, just weeks before a general election that ended almost a decade of centre-right National Party rule. While she was on maternity leave the coalition government was led by Deputy Prime Minister and Foreign Minister Winston Peters, who will attend a Southeast Asian summit in Singapore this week. Ardern will leave her home town of Auckland to return to the capital, Wellington, on Saturday. Her partner, Clarke Gayford, will care for the baby full-time while she takes her place in parliament on Monday. In a video posted on Facebook on Sunday, Ardern rocked Neve’s cradle while outlining plans to focus on mental health, the environment, trade and an employment-related announcement when she returned to work. But she will also face some looming challenges, including plummeting business confidence, which economists worry could dampen economic growth, and the threat of a pay strike by primary school teachers. “She does have some challenging issues to deal with that have developed while she’s been away,” said Bryce Edwards, Wellington-based analyst at Critical Politics. During his tenure, Peters, a 40-year political veteran known for his outspoken views and protectionist stance, had to grapple with deteriorating relations with key ally Australia and the first nationwide nurses’ strike in 30 years. While Peters was in charge, the government also launched its NZ$1.5 billion ($1.02 billion) family package to provide tax breaks for families with young children as well as releasing the country’s new defence strategy, which took a tougher stance on China and drew complaint from the Asian giant.