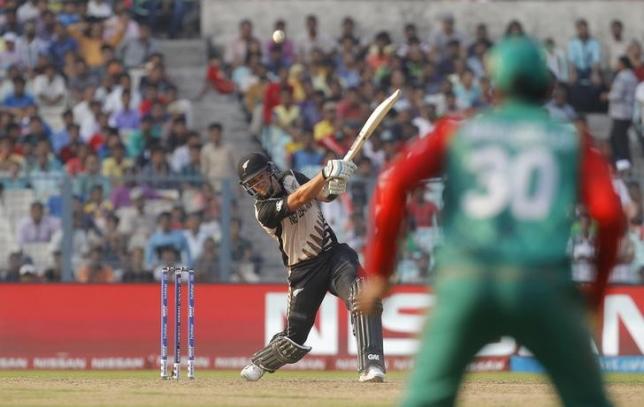 KOLKATA – Bangladesh put in a disciplined performance in the field to restrict New Zealand to 145-8 in a World Twenty20 Super 10 stage match at the Eden Gardens on Saturday. New Zealand skipper Kane Williamson won the toss and opted to bat, but paceman Mustafizur Rahman took five wickets for 22 runs, including two in the final over, on a very dry pitch in Kolkata. Rahman made sure New Zealand did not get off to a good start when he bowled Henry Nicholls for seven in his first over. Nicholls, back in the side in place off the injured Martin Guptill, opened with Williamson, who was the pick of the New Zealand batsmen, hitting five fours and a six in his 42 off 32 balls, before he too was bowled by Rahman. The 20-year-old was indebted to a stunning catch by Shuvagata Hom for the wicket of Grant Elliott on nine, and he struck twice more off consecutive deliveries in the last over to bowl Mitchell Santner and Nathan McCullum for a golden duck. Al-Amin Hossian broke through New Zealand's middle order, bowling the dangerous Colin Munro for 35 and picking up the wicket of Ross Taylor for 28. Bangladesh skipper Mashrafe Mortaza bowled the big-hitting Corey Anderson for a duck. Bangladesh are bottom of Group Two and seeking their first win in the group stages while New Zealand are through to the semi-finals. –Reuters