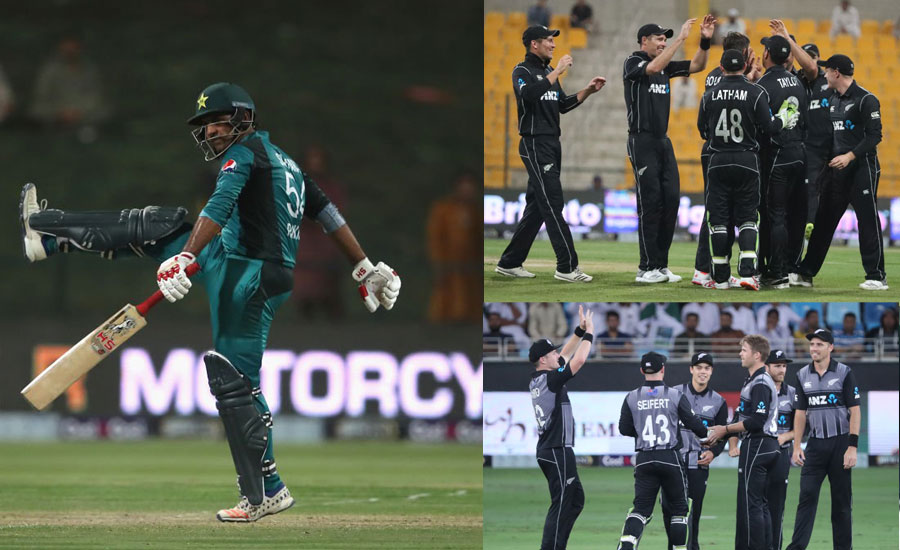 ABU DHABI (92 News) – A Trent Boult hat-trick helped fire New Zealand to a 47-run victory in the first ODI against Pakistan in a match defined by some exceptional bowling displays. The New Zealand speedster went one better than Pakistan twirler Shadab Khan, who earlier claimed three wickets from four balls to halt New Zealand after Colin Munro and Ross Taylor collaborated for a 130-run partnership after Pakistan had dominated the first hour. Shaheen Afridi and Shadab both scooped four-fors, but the tail wagged to propel the Kiwis to a respectable if not remarkable first innings score of 266, before Boult got stuck into Pakistan’s top order. First, he bowled danger man Fakhar Zaman off his pads, before Babar Azam nicked through to slip and Mohammad Hafeez was trapped in-front, with the home side in a funk at 8/3. Fresh off the plane – the left-arm paceman missed the Twenty20 International series to attend the birth of his first child – it didn’t take long for Boult to announce his arrival as he joined Danny Morrison and Shane Bond as the only male New Zealanders to claim an ODI hat-trick. Shoaib Malik and Imam ul-Haq – who was just four years old when Malik made his debut against West Indies at Sharjah in October 1999 – combined to slowly rebuild the Pakistan innings, in similar fashion to Taylor and Latham in the first. Ardent Pakistan fans had to dig a little deeper for optimism when a double strike ended the 63-run fourth-wicket partnership, as Pakistan fell to 73/5. Firstly, Lockie Ferguson dismissed Imam (34 from 36 balls), who mistimed a pull to de Grandhomme, with the catcher then nabbing Malik (30 from 50) the next over, who picked out Williamson at mid-off. Sarfraz Ahmed and Imad Wasim also combined effectively. Sarfraz was his usual busy self and although Imad focused more on resistance in the early part of his knock, successive maximums in the 36th over signalled Pakistan weren’t going down without a fight. The skipper soon reached his half-century as the pair clocked up their century stand, which threatened to give this match the climax it deserved until de Grandhomme (2/40, plus two catches) picked up the vital scalp of Sarfraz (64 from 69 balls) – bowled missing a dab to third man – as we entered the final ten overs. Imad reached fifty before Southee got his man, while Ferguson claimed the wicket of Shaheen as New Zealand got their series off to a promising start. Earlier, after winning the toss and electing to bat, New Zealand’s George Worker and Colin Munro didn’t last long – the former edging tamely to Sarfraz Ahmed off Shaheen Afridi (4/46) before the teenage sensation removed his fellow opener lbw. The early inroads shackled the New Zealand batsmen in the middle overs, but Kane Williamson and Taylor kept the scorecard ticking along before the former picked out short midwicket off a Shadab long hop. Latham – who boasts an exceptional record in Asia – joined Taylor at the crease as the duo set about hitting over half of their team’s total. It wasn’t a demolition job by no means, just accomplished batting, calmly finding the gaps without too much risk. Only 20 of Latham’s 68 runs came from boundaries, but the Kiwis were hitting five runs an over without breaking sweat. With Taylor and Latham in control, Shadab (4/38) then bowled a potentially match-defining over when he trapped Latham and Henry Nicholls in front off successive spinning deliveries. He then got Colin de Grandhomme edged at slip two balls later. Another big wicket followed when Taylor was bowled by Imad the next over, with New Zealand’s mid-to-lower order all but wiped out.